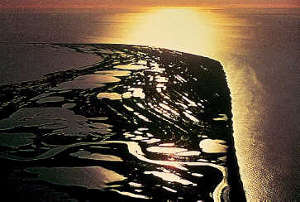 Cape Krusenstern National Monument occupies the same space as Cape Krusenstern Archaeological District. The property is located along the coast of the Chukchi Sea in northwest Alaska and is composed primarily of a coastal plain filled with large lagoons separated by rolling limestone hills. In the strata of those hills is recorded the geological changes of thousands of years of sea-level variations. Also among that strata is the evidence left by thousands of years of human occupation of the area.

There are more than 70 distinct limestone ridges contained in the 9,000-acre archaeological district. The ridges formed during different periods of "fair weather" and were eroded during long-term periods of storminess. But the periods of fair weather varied from 10 to 100 years in length, the oldest being next to the Krusenstern Lagoon, the youngest along the present-day beach. Archaeologists have been working the site over and have uncovered all kinds of artifacts from several locations. Among the more than 1,500 archaeological features recorded are everything from simple hunting camps to single habitations to small settlements consisting of several houses. They have found everything from ancient whale and caribou bones to structural wood to harpoons to pottery and stone tools. The older artifacts come from basic hunting camps, the newer artifacts from subterranean constructions (pithouses, storage structures). Basically, what is being discovered and explored is a long-term history of prehistoric and historic Alaska Native cultures.

Cape Krusenstern is sandwiched between the Chukchi Sea and Kotzebue Sound. The sound is filled with lagoons of brackish water and the lagoons are constantly being redefined with the seasons as barrier spits and islands are constantly shifting. But the ground cover and brackish water make for excellent breeding and feeding grounds for many species of mammal, bird and fish.

Most of the property is underlain with permafrost and that permafrost usually extends downward for hundreds of feet. Summer sees a surface thaw but the depth of that varies with the presence of streams and bodies of water. Beneath water, the thaw can extend for tens of feet while in the uplands that thaw might reach only one foot. That means the middle elevations tend to be drier in the summer and grow a heavy cotton grass tussock tundra. Lower slopes show poor drainage and tend to be filled with peat. The highest points (and Mount Noak reaches 2,010 feet) have less soil on top of the bedrock, which means they drain better and aren't permanently frozen beneath. The majority of the property is covered with either peat or cotton grass. Drier lowlands grow dwarf birch, cranberry, blueberry, dwarf willow, salmonberry and Labrador tea. There are a few small pockets of boreal spruce forest and those pockets are expected to grow larger with climate change. The higher elevations tend to grow a thick mat of lichens and prostrate shrubs.

The streams are filled with grayling, pike and Dolly Varden char. The most abundant large mammal is caribou of the Western Arctic Caribou herd, a herd of nearly 500,000 animals that ranges all over northwestern Alaska. But there are also plenty of hares, foxes, moose, wolves, muskoxen and brown bear in the area.

There are no roads, no trails, no campgrounds, no gift shops... The nearest "civilization" is in Kotzebue and that's a short airplane flight away. Visitors need to be skilled and well-equipped back country explorers... ready for anything including high winds, heavy rains and regular snow. And that's in the summer. Winter visitation is only for the truly hardy...