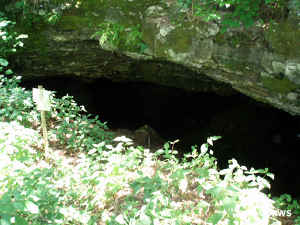 An entrance to the cave

Key Cave National Wildlife Refuge is a 1,060-acre property established in 1997 to protect and preserve the only habitat on Earth where the endangered Alabama Cavefish lives. Kay Cave and Collier Cave, another cave located on the property, are also classed as "priority one" maternity caves for an endangered species of bat: the gray bat (Myotis grisescens). Both caves are located in a limestone karst area on the northern side of Pickwick Lake, about 5 miles southwest of Florence, Alabama. The area has numerous sinkholes and several subterranean cave systems. Most of the National Wildlife Refuge is located north of the two caves in order to protect the water source: this is a high hazard risk area as the sinkholes are an integral part of the groundwater recharging the caves. Key Cave National Wildlife Refuge was authorized to be about 1,800 acres in size and may reach that size with additional purchases of land in the Key Cave recharge area. This 1,060-acre property was owned by the Monsanto Chemical Company for many years until they sold it to The Conservation Fund in 1992. The Conservation Fund managed the property until US Fish & Wildlife bought it in 1997.

Historic farming practices in the area led to severe erosion problems. Couple that with fertilizer-laced irrigation runoff and the stage was set to drive the Alabama Cavefish into extinction. So the first work done on Key Cave National Wildlife Refuge centered around controlling the erosion and channeling the runoff in other directions. Still, almost 300 acres of the refuge are planted in corn, wheat or soybeans. Another 260 acres are planted in native grasses. 122 acres of long-fallow fields around the 256 acres of oak and hickory forest have been replanted with hardwood tree seedlings. 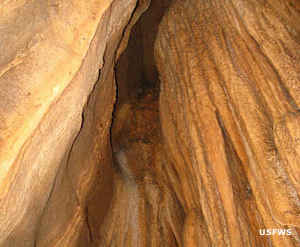 A guano slide in the cave

Key Cemetery is located on Key Cave National Wildlife Refuge. As this land was part of a large cotton plantation in the 1800's, Key Cemetery is quite possibly a slave cemetery.

The Alabama Cavefish may be the rarest cavefish in America, and may be one of the rarest of freshwater fish in the world. Key Cave also contains two species of blind crayfish. Common mammals seen on the property are cottontail rabbits, white-tailed deer, gray squirrels and coyotes. Among the birds often seen are northern harriers, eastern meadowlarks, eastern bluebirds, horned larks, grasshopper sparrows, dickcissels, loggerhead shrikes, field sparrows and northern bobwhite. During the winter you might also see a few short-eared owls in the grasslands areas. 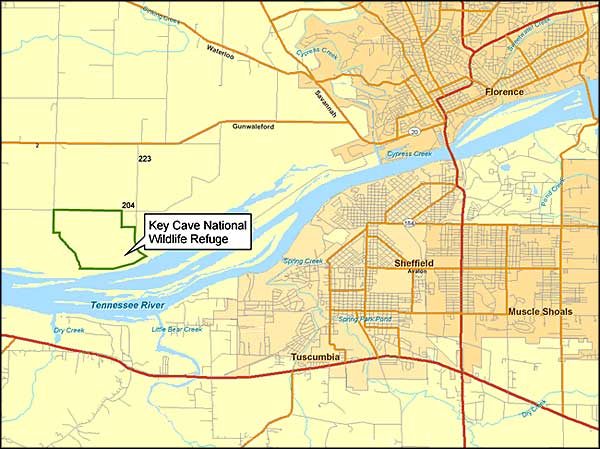