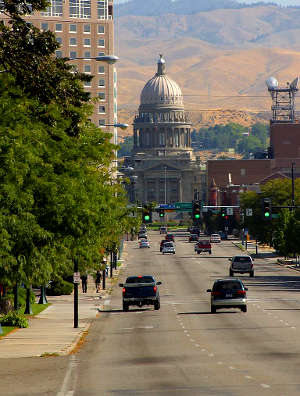 A large chunk of Idaho is tied up in a few National Wilderness Areas that take up a lot of the land contained in the National Forests in the state. When the Lewis & Clark Expedition came through Idaho in 1804-1805, they first came over the Bitterroot Mountains from Montana. They floundered around for a couple weeks and then went back to Montana and headed further north before trying their luck westward again. They had unknowingly walked onto the Idaho Pluton: a huge batholith of ancient granite carved deeply by glaciers and millions of years of fast-flowing streams. The forest was impenetrable, the canyons uncrossable, the rivers unraftable... When they finally did get across the region, they met up with the Nez Perce and the Nez Perce saved their lives. What convinced the Nez Perce to help them? The presence of Sacajawea and her infant son, Jean Baptiste Charbonneau. Any group of people who traveled with a woman and infant were obviously not warriors bent on conquest...

Probably 2/3 of the state's population lives along the Snake River Valley in southern Idaho with heavy concentrations around Boise-Nampa, Twin Falls, Idaho Falls and Pocatello. The whole southwest corner of the state is high-latitude desert, and a large chunk of that is contained within several BLM wilderness areas. In the eastern panhandle region what isn't forest is probably lake, while most of the western half of the panhandle is Palouse prairie (rolling hills covered in shortgrass).

Idaho is a state of big contrasts. For many years the state was dominated by agricultural interests in the south (those famous Idaho russet potatoes in particular) and timber companies in the north. These days, the Snake River Valley has attracted a lot of high tech R&D and manufacturing.

Then there's Sun Valley/Ketchum/Hailey, one of the most expensive places in America to hang out. And just over the hills to the southeast of there is what remains of the Idaho National Laboratory: where the world's first nuclear reactors were designed and built... and still sit, mostly decommissioned but a couple are cemented in place and cooking away internally.

Evidence has been found that dates the earliest human habitation of Idaho to about 14,500 years ago. We have no idea what happened with those ancient folks but when the Europeans arrived, most of the area was occupied by the Northern and Western Shoshone and Bannock tribes in the south and the Coeur d'Alene and Nez Perce tribes in the north.

The first travelers of European descent to enter the area were with the Lewis and Clark Expedition in 1805, headed for the Pacific Coast. They entered what is now Idaho several times from Montana but were unable to find a usable route west until they traveled further north and crossed the Bitterroot Mountains from Montana via Lemhi Pass and descended into the Clearwater River drainage. Their return route east from the Pacific Coast also followed the Clearwater across the Idaho panhandle to the Bitterroots.

Exploration of Idaho was done mostly by the competing fur companies, one financed by the British Hudson's Bay Company, the other (under several names) financed by John Jacob Astor. It was Robert Stuart, an American explorer with the Astor Expedition who discovered South Pass in Wyoming on his return from the Pacific Coast in 1812. South Pass later became a key feature on the Oregon Trail.

The first Christian missionaries arrived in 1836, establishing a Protestant mission near Lapwai among the Nez Perce. In 1842 Father Pierre-Jean De Smet arrived near Lake Coeur d'Alene and began his mission, eventually building the Cataldo Mission that is now the oldest surviving constructed building in Idaho.

This was the earliest days of the Oregon Trail, a route followed by thousands of people headed west to Oregon in search of a better life, and also to help solidify the American claim to Oregon Territory. Until the early 1850's most folks just continued on across Idaho to Oregon, stopping only to camp at night. The Mormons of Utah attempted their first settlements in Idaho beginning in 1855 but nothing lasted until they settled at Franklin in 1860. At that time they believed they were still in Utah but a national survey in 1872 fixed the state line where it is now and many of the Mormon settlements around Bear Lake and in the Upper Cache Valley found themselves in Idaho.

1860 is also the time of the first gold strike in Idaho, near Pierce in the Clearwater River drainage. Within a few years the population had boomed and other ore bodies were found. The end of the Civil War brought in a flood of new homesteaders. Then the end of construction on the Transcontinental Railroad released a lot of Chinese laborers into the general workforce. Many came to Idaho to work in the mines but the citizens resisted, passing several pieces of anti-Chinese legislation specifically designed to force them out of the state.

The first territorial capitol was established at Lewiston in 1864, then transferred to Boise in 1865. Idaho also took part in the general disenfranchisement of Mormon polygamists in the 1870s, resulting in a Supreme Court case decided in 1877 which upheld the seizures of vast amounts of Mormon property, closure of departments of the church and the looting of Mormon-owned banks. Today, Mormons are still the single largest religious denomination in Idaho with about 23% of the state's population.

Idaho became a state in 1890. Large-scale mining operations had spread across many mountainous areas in the state and after statehood, a shooting war developed between the companies and their guards and the quickly unionizing miners. Several of the mines were blown up before the National Guard intervened, occupying several mining areas and locking up every union member/sympathizer they could find. The whole thing culminated in the 1905 assassination of former Governor Frank Steunenberg (who had been elected on a pro-labor platform in 1898 but sided with the mine owners to put down a union uprising in 1899).

The Idaho National Laboratory was established in 1949 on an 890-square-mile reservation in the barren desert area east of Arco and west of Idaho Falls. The property was used for research and development of nuclear power with more than 50 one-of-a-kind nuclear reactors built and tested. Only three reactors are still active but the facility is still in the forefront of research and development of the Next Generation Nuclear Plant. Researchers are also in the forefront of the development of hybrid and pure-electric automotive vehicles.

For many years a large part of Idaho's economy revolved around timber and lumber products. These days, that has shifted to science and technology with plants to make semiconductors and semiconductor products, computers, displays, laser printers and other digital products scattered across southern Idaho. United Airlines and Continental Airlines both trace their roots back to the Varney Air Group that operated out of Lewiston for years.

Idaho's personal income tax ranges from 1.6% to 7.8%. The state sales tax is 6% and local options are limited to making that peak at 6.5%. Food is taxed but prescription drugs are not. Lodging taxes vary by locality and generally run between 7% and 11%. Idaho also runs a state lottery, the proceeds of which mostly go to support the state's school systems. 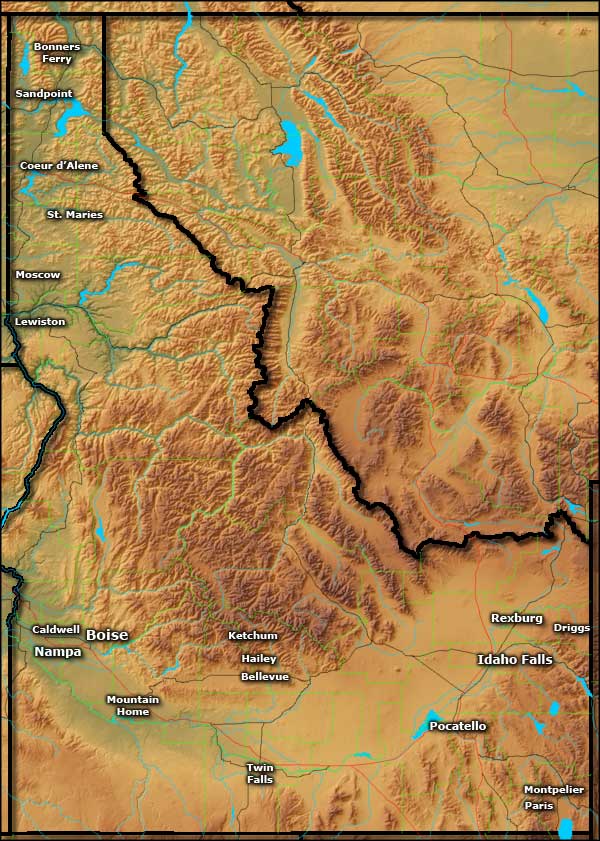