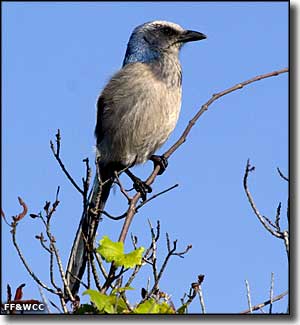 Myakka State Forest is comprised of some 8,593 acres in southwestern Sarasota County. The land was bought in 1995 as part of the Myakka Estuary Conservation and Recreation Lands project. Myakka State Forest is located about seven miles west of Port Charlotte, about ten miles southeast of Venice. Most of the forest is within the city limits of North Port. There is an entrance at the very north end of the property but the main entrance is on River Road (CR 777) about 11 miles south of Interstate 75.

Myakka State Forest is a mix of depression marshes, sand scrub, prairie hammock and mesic flatwoods (slash pine and longleaf pine with a palmetto understory). The marshes attract a lot of wading birds and other wildlife. The Myakkahatchee Creek flows through the forest and the forest includes about 2.5 miles of frontage on the Myakka River. 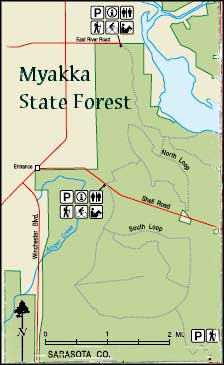 Myakka State Forest offers about 19 miles of marked hiking, biking and horseback riding trails, plus picnicking sites, fishing, hunting and primitive camping (with an appropriate special use permit). There is a canoe/kayak launch site in the central part of the forest but users have to carry their boats to the site by foot (no vehicles are allowed).

7,295 acres of Myakka State Forest are included in the Myakka Public Small Game Hunting Area (PSGHA), jointly managed by the Florida Division of Forestry, Florida Fish & Wildlife Conservation Commission and the Southwest Florida Water Management District. The Myakka PSGHA is the central portion of Myakka State Forest, east of Winchester Boulevard, west of Jennings Boulevard and south of the Myakka River. Everything east of the Myakka River and west of Winchester Road is off-limits to hunters. Immediately east of Jennings Boulevard is West Port Charlotte anyway.