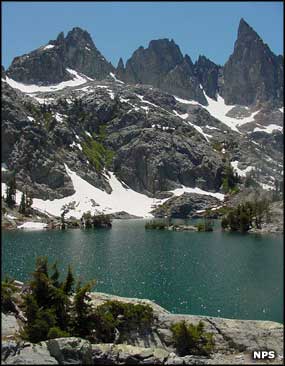 Originally, Ansel Adams Wilderness was established as the Minarets Wilderness in the Wilderness Act of 1964. That was a 109,500-acre property that was expanded (and renamed) from the Mount Dana-Minarets Primitive Area established about 30 years before. The wilderness area was expanded again in 1984 and renamed after Ansel Adams, a famous environmentalist and member of the Sierra Club who was also well-known globally for his black-and-white landscape photographs.

Elevations in Ansel Adams Wilderness vary from about 3,500 feet to 13,157 feet (at the summit of Mount Ritter). The Ritter Range, centerpiece of the wilderness area and containing the highest points in the wilderness, is actually to the west of the Sierra Nevada Crest and up to 3,000 feet higher. It's because of that relative drop in elevation to the lower Sierra Crest that Mammoth Mountain (which sits in that gap) gets the snowfall it gets.

A large portion of Ansel Adams Wilderness is above treeline (which varies roughly between 9,600 feet and 10,400 feet in elevation). That's an area of alpine tundra and (seasonally) wildflower-studded meadows with a large selection of glacial lakes. Below treeline, depending on elevation, the area is dominated by red fir, Jeffrey pine and lodgepole pine. 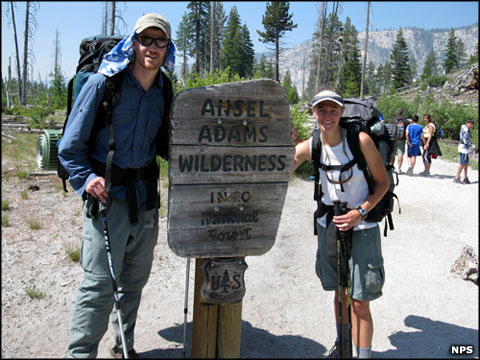 Ansel Adams Wilderness contains about 349 miles of hiking trails including sections of the Pacific Crest and John Muir Trails. There is also a section of the "Sierra High Route" running across the wilderness along the base of the Ritter Range: the route runs roughly parallel to the John Muir Trail but higher up and is only about 1/3 of the way along developed trails, the rest being cross-country above treeline and on loose-talus slopes, granite slabs and alpine meadows. The route does not require technical skills but at times Class 3 scrambling skills are needed to navigate the foot-and-hand-holds necessary on some solid rock faces.

Most folks who visit Ansel Adams Wilderness enter via the trails from Devils Postpile National Monument. The Minarets area also attracts a lot of technical rock climbers to its spectacular glacier-sculpted sheer faces and sharp, high points of solid, metavolcanic rock. To protect this popular wilderness, there is a trailhead quota system designed to limit the amount of overnight use and the overall number of daily visitors from May through October.

Ansel Adams Wilderness is also a bit famous as the place where Steve Fossett crashed his airplane in 2007. In spite of the crash site being near Minarets Lake and the large amount of effort expended to find Fossett, the wreckage wasn't discovered for more than a year. 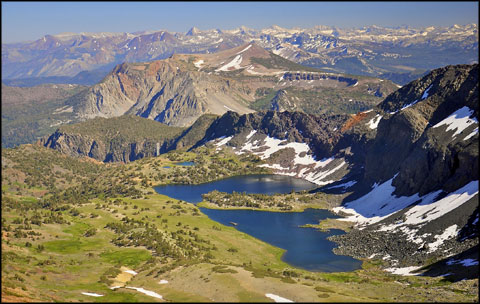