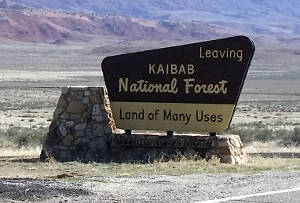 Elevations on the Forest range from a low of about 5,500' southwest of Williams to the summit of Kendrick Mountain (10,418'). The Kaibab is a 1.6 million-acre component of the largest contiguous Ponderosa pine forest in the United States. On the east and southeast, the Kaibab borders Coconino National Forest. To the south it borders the Prescott National Forest. And a hike to the top of Kendrick Mountain will let you see all of this and more.

The developed campgrounds at Kaibab see more than 150,000 visitors each year. The campgrounds at Dogtown Lake, Cataract Lake, White Horse Lake and Kaibab Lake are operated under permit by Southwest Recreation. These lakes are where you go for fishing on this Forest because other than the Colorado River, there's not a single stream within the Forest boundaries that flows all year round. Some folks try their luck at some of the bigger tanks on the Forest, places like Perkins, Hells Canyon, Bar Cross and JD Dam.
The Cohonina and Kayenta Anasazi peoples left quite a few archaeological ruins across this countryside. Their cultures first appeared in this area around 700 AD and then disappeared by about 1150 AD. They lived mostly in stone houses and pit houses, cultivated their crops and made pottery. They were here during the time of the eruptions at Sunset Crater, just to the east. 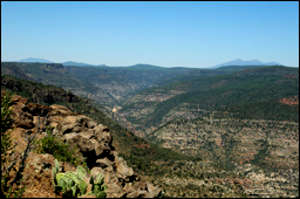 At the southern edge of the Kaibab is the Sycamore Canyon Wilderness, a place where Sycamore Creek spent several million years cutting into the edge of the Mogollon Rim to make itself a beautiful pathway heading south to the Verde River. The Sycamore Rim Trail is a gorgeous 11-mile hike along the Rim that gives quite the taste of this spectacular area. You can also enter into the Canyon from its northern end and make the hike down through the riparian areas that line the stream for most of that 20-mile journey to the Verde.

Saddle Mountain Wilderness is on the northeast side of the Forest, sandwiched between the Marble Canyon and the edge of the Kaibab Plateau. On the south side is the Grand Canyon National Park and on the north side is the Paria Canyon-Vermilion Cliffs Wilderness.

Kanab Creek Wilderness is on the northwest side of the Forest, bordered on the south by the Grand Canyon and on the west by Grand Canyon-Parashant National Monument. Kendrick Mountain is northeast of Williams and southeast of Tusayan, on the eastern edge of the Forest against the boundary with the Coconino National Forest.

Kanab Creek photo and small icons courtesy of the US Forest Service
Other photos courtesy of TheArmchairExplorer, CCA-by-SA 4.0 License