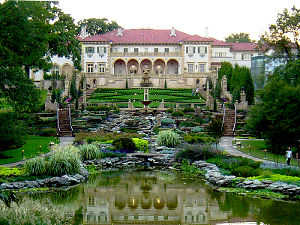 About 60% of the folks who live in Oklahoma live within a few miles of downtown Oklahoma City or downtown Tulsa. The eastern part of the state is wet and covered with hardwood forests, the western part is mostly arid short-grass prairie. The mountain ranges are scattered and small. The weather here... let's just say it can be extreme, often.

Oklahoma started out as Indian Territory, and there are still more than 25 Native American languages spoken in the state. In the southeast corner of Oklahoma you'll find the world's tallest hill: Cavanal Hill. At 1,999' high, it's one foot less than the official definition of "mountain."

Oklahoma City was founded during the Land Run of 1889 (when the "unassigned lands" were opened for non-Native American settlement) and had a population of more than 10,000 within 24 hours of its founding. The population doubled over the following 10 years and by the time Oklahoma became a state in 1907, the city had surpassed the territorial capital at Guthrie as the center of population and business in the new state. Fittingly, the capital was shortly moved to Oklahoma City.

The Ouachita Mountains in southeastern Oklahoma