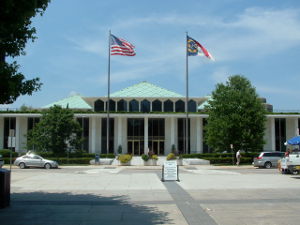 North Carolina rises from the Atlantic Coast on the east into the Appalachian Mountains on the west. Mount Mitchell (6,684') is the highest point in the United States east of the Mississippi River. A famous point on the Atlantic Coast is Cape Hatteras, the well-known "Graveyard of the Atlantic," with more than 1,000 ships recorded to have sunk in the area since records first began in 1526.

North Carolina was inhabited by Native Americans for thousands of years before Hernando de Soto and his Spaniards arrived in 1540. Captain Juan de Pardo arrived in 1567 and attempted to establish the first European settlements in the interior of North America. He and his men built six forts, then de Pardo and a few of his people went back to Parris Island (once a colony of Spanish Florida) before moving on to Mexico where they had been sent by the King of Spain to protect the silver mines. Within a year, all but one of the settlers had been killed by the natives and all the forts had been destroyed.

In 1584, Queen Elizabeth I of England granted a charter to Sir Walter Raleigh to begin the English settlement of North Carolina. Within a few years he established two colonies on the coast but both quickl"y failed. The first was abandoned after a year and the settlers went back to England. The second disappeared almost completely and is now often known as the "Lost Colony."" There is a lot of speculation but most folks assume the members of the colony were assimilated into the local native tribes when Sir Walter Raleigh and his supporters failed to return with supplies in a timely fashion. For that matter, Sir Walter Raleigh himself didn't arrive until 1602 and that mission, like so many before, was deterred from completion by the efforts of the crew to increase the profitability of the venture: by the time they were ready to go to the colony site, it was too late in the season and the weather had turned bad. On their return to England, Raleigh was arrested and charged with treason by King James I and that was the end of it.

Settlers from Virginia Colony began migrating into the coastal areas in the 1650's. King Charles II granted a new settlement charter for the area in 1663 and that charter named the area "Carolina." To settle territorial questions, a second charter was written in 1663, then the territory was split into North and South Carolina in 1710. North Carolina remained under the charter ownership for a number of years but South Carolina became a crown colony in 1729. 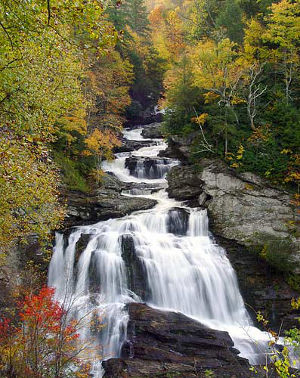 Settlement of the area proceeded rapidly after 1650 due to the large amount of usable farmland. After 1663 and before the Revolutionary War, the largest European immigrant group was composed of English "indentured servants" (many of which were English convicts sold to American land-owners to serve out the usual 20-year sentence for petty crimes). During the Revolutionary War, the land-owners in the coastal regions were much more supportive of the British Crown while the settlers in the upland regions to the west (mostly Scots-Irish, English and German Protestants) were more supportive of American independence.

In the early years, there wasn't much of a line between indentured servants and slaves: members of both groups could eventually earn their way out of the classification and become free. There was also a group of free colored families descended from unions/marriages between free white women and African/African-American men: as the mothers were free, the children were born free. Slowly economic situations in Great Britain changed and the flow of indentured servants decreased while the flow of African slaves increased. That also led to a "hardening" of the legalities around slavery, especially as so much of the local growth and prosperity came from production of tobacco and that production was based on slave labor.

After the Revolution, many Quaker and Mennonite settlers were successful in persuading North Carolina slaveholders to arrange the manumission of many for their slaves and the population of free people of color rose significantly. Free African-Americans were even allowed to vote until the State Legislature revoked that in 1835 in the aftermath of the slave rebellion led by Nat Turner in 1831.

When the Civil War began in 1861, about 1/3 of the population was composed of slaves, a lesser proportion than in many Southern states. And North Carolina didn't choose to secede until President Abraham Lincoln called on the state to invade South Carolina. At that point, North Carolina became the last state to join the Confederacy (although there is some dispute with Tennessee about that distinction). There wasn't much fighting in North Carolina during the war but the state did contribute more soldiers to the Confederate Army than any other state (and also suffered the highest dead-and-wounded toll with more than 40,000 troops succumbing to battlefield wounds, diseases and starvation). North Carolina also contributed about 15,000 troops to the Union Army during the war.