Anaho Island is a small (247 acres), rocky island in Pyramid Lake that is much loved by a large colony of American white pelicans. Between 8,000 and 10,000 white pelicans return to Anaho Island every spring after spending their winters in Mexico. They come back because of the excellent fishing during the spring spawning runs at Pyramid Lake. They also fish the wetlands and shallow lakes at Stillwater and Fallon National Wildlife Refuges and at Lahontan Reservoir.

Anaho Island National Wildlife Refuge also serves the nesting, breeding and feeding purposes of birds like California gulls, Double breasted cormorants, Black-crowned night herons, Great blue herons and Caspian terns. Because this property is so critical to the survival of some of these species and because their nesting habits are so easily disturbed, Anaho Island National Wildlife Refuge is closed to the public. The closure boundary extends to 500 offshore from the island. Anaho Island can be seen from anywhere around the shoreline of Pyramid Lake. There is also an excellent overlook provided on the Pyramid Lake Scenic Byway for folks who want to see what all the fuss is about. 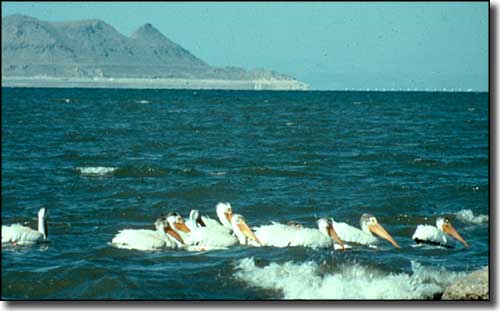