Along the shore at Roosevelt Campobello International Park 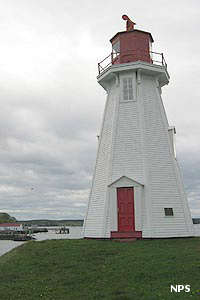 Roosevelt Campobello International Park is located on Campobello Island at the mouth of the Bay of Fundy. The area is world-famous for the tidal range, and the usual tidal range at Campobello Island is 28 feet (further north in the Bay of Fundy the tidal range averages 56 feet). The park itself includes about 2,800 acres of natural space including the Edmund Muskie Visitor Center, FDR's 34-room summer home and four other cottages. There are 8.4 miles of driving roads in the park and 8 miles of hiking trails. There are also picnic areas scattered throughout the park.

Campobello Island was the summer home of Franklin Delano Roosevelt for many years. He didn't visit nearly as often after he contracted polio but in the years before that, he often organized hiking, swimming and sailing expeditions for his family. It was at Campobello that Roosevelt contracted poliomyelitis at the age of 39 (August 1921). Eleanor returned to the island often after 1921, at first with her small children and later by herself in the summer. It was after she died in 1962 that the heirs deeded the property to the governments of Canada and the United States. The park itself was established in 1964.