View from the top of the Greer Grade, Gold Rush Historic Byway

It was in the area of Pierce (along what is now the Gold Rush Historic Byway) that gold was discovered in Idaho for the first time in 1860. That original strike caused the construction of a shantytown named "Orofino," but that camp was short-lived and modern Orofino now exists well down the road in the Clearwater Valley. It was also in this area in 1805 where Lewis & Clark and the Corps of Discovery staggered out of the woods and were saved from starving to death by the Nez Perce they stumbled across. There's now a Discovery Center in Wieppe that commemorates this fateful meeting with displays and exhibits about the Nez Perce and about the Lewis & Clark Expedition. The Discovery Center also houses the Wieppe Library, Technology Center, a Small Business Development office, a College Outreach office and a Conference/Meeting area with kitchen facilities and public restrooms.

The Gold Rush Historic Byway is a 42-mile route along Idaho Highway 11 between US Highway 12 at Greer and the end of the road in Headquarters. The beginning of the road is a short but steady climb up the Greer Grade above the Clearwater Valley. Just over the summit begins a run through cultivated fields of grasses and grains for about 14 miles to Weippe. You'll be crossing the Weippe Prairie in this area, one of only eight registered National Natural Landmarks in Idaho. The Weippe Prairie is justly famous for its camas bloom every spring.

Just past Wieppe, the road turns northeast and heads into deeper forest. Twelve miles from Wieppe you'll come to Pierce, home of Idaho's first governmental building: the old Shoshone County Courthouse. The Pierce area saw considerable mining activity in the early days but most of the business in the area was logging, for many years. From 1865 to 1870, about 80% of the local population was Chinese immigrants. Some were businessmen, some restaurateurs, but most worked in the mines. Over the years, local prejudice built up, culminating in an Idaho court decision in 1887 that interpreted the law to read that Chinese were not allowed to own or lease any mining claim. That ruling caused a mass migration of Chinese people out of the mining communities and out of Idaho altogether.

Twelve miles north of Pierce is Headquarters, named by Potlatch Lumber because it was the center of the local timber industry for years. Between Pierce and Headquarters is the Bald Mountain Ski Area, a site originally built and maintained by Potlatch for their employees. In the mid-1970's, the ski area was opened to the public and is now a community owned-and-operated site.

Also between Pierce and Headquarters is Deer Creek Reservoir, an 80-acre reservoir constructed by Potlatch Corporation and the Idaho Department of Fish and Game. The reservoir is stocked with cutthroat and rainbow trout but vehicular access is limited to that time period between May 20 and September 30. The rest of the year, folks just have to walk in (it's allowed).

A trunk railroad line was built from Orofino to Headquarters in 1928. From there, a network of short spur lines spread out into the vast timber stands in the forests to bring cut timber back to town and deliver it to the company mills in Orofino. Today, Potlatch still has forest managers working from Headquarters, overseeing thousands of acres of forest that continue to provide the raw materials the mills need. The other main business in Headquarters these days revolves around recreational pursuits.

About 1.5 miles beyond Headquarters along one of the small county roads you'll find Campbell's Pond. The pond supports a native population of bass and sunfish but Idaho Fish & Game visits every spring and drops off a truckload of locally-grown young rainbow trout, too. The recreation area offers camping, floating docks, picnic tables and vault toilets. 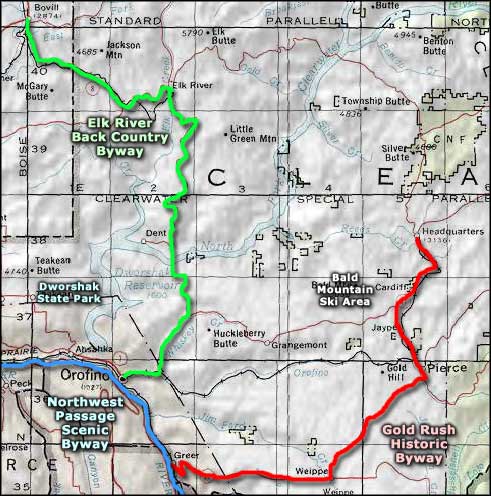