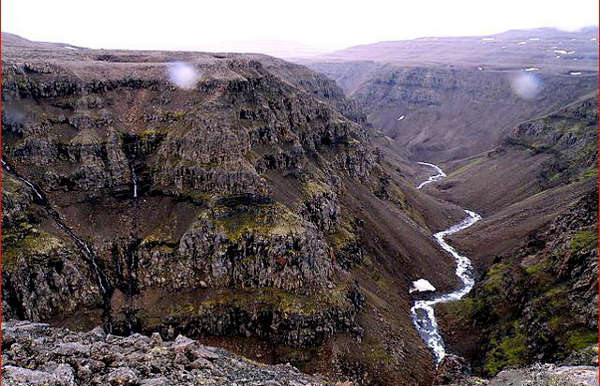 On today's Putorana Plateau, home of the Siberian Traps

About 252 million years ago the greatest extinction event in the history of Planet Earth occurred. It wasn't an overnight thing, some estimates say the Great Dying happened in pulses spread over about 9 million years. However it was, geologists have dated the end of the event pretty closely and it is now the end of the Paleozoic Era and beginning of the Mesozoic Era, end of the Permian Age and beginning of the Triassic.

The story is long and convoluted, much of it hypothesis and theory put forth to explain some of the mysteries turned up in the record in the rocks. Central to most accounts was a massive volcanic event in central Siberia that became known as the Siberian Traps. One conjecture is that a massive asteroid impacted the Earth in Wilkes Land, part of what is now Antarctica. Immediately opposite on the globe is the area of the Siberian Traps. The name comes from a Swedish word meaning "stairs" and stair-like formations are typical of basalt flows. The lava flows went on for about a million years. Portions of the flows were explosive, too. It is postulated the lava began forest fires that ravaged the supercontinent and removed much of the vegetation from the surface of the Earth. What was left was drenched in acidic rain (due to the high amounts of carbon dioxide and methane in the air) that washed into the acidic seas surrounding (and flowing into the cracks) the breakup of the Pangaea supercontinent.

The final pulse of the extinction event involves a quick rise in oceanic temperatures to 104°F (40°C) and further rapid acidification of the atmosphere and oceans in a runaway greenhouse effect. Evidence says the concentration of CO2 increased by 2000 ppm (at the beginning of the industrial age the concentration of CO2 hovered around 280 ppm). With all the masses of dead and dying plants, fungi and mold populations exploded, further fueling the explosion of carbon and methane into the atmosphere. The peak die-off may have lasted for about 60,000 years. When it was over, more than 96% of all marine species and more than 70% of all terrestrial species were gone. What was left was the hardiest of the hardy, and life slowly began to reclaim the world, beginning from the poles and from the bottom of the ocean.

From the time of its peak effect, life on Earth took more than 10 million years to recover. That period of time has been named "the coal gap" by geologists as the geological timeline shows a distinct gap in wide-spread vegetative processes at that time. Most coal we see today is descended from ancient forests and peat bogs, placed before or well after the extinction event. The first coal deposits from after the event were thin and low-grade, dated to at least 10 million years into the Triassic period.

The Permian-Triassic Extinction Event is also the only known event in which major families of insects died off. The Permian Age was the age of giant invertebrates and when the age ended in near-total die-off, so did the big bugs.