The Arrigetch Peaks are in the Endicott Mountains 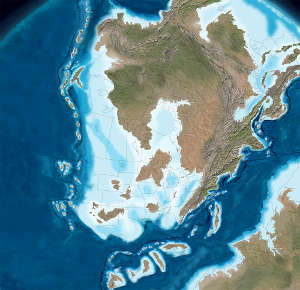 North America, 360 million years ago
Click or tap to see a larger version

The Kanayuk Conglomerate is a result of massive water flows in central Alaska during the Devonian and early Carboniferous Periods. The material began to be deposited in a floodplain that grew to be about 500 miles long and up to 30 miles wide. In places, the deposit is up to 8,000 feet thick. Deposition of the materials that now make up the conglomerate was on and off for about 50 million years.

The largest exposure of the Kanayuk Conglomerate today is in the Endicott Mountains of the central Brooks Range in Alaska. The Endicotts run about 150 miles east-west and about 70 miles wide north-south. The range has been deeply incised by glaciers over the millenia with broad, U-shaped valleys to the south and steep tors and arretes on the north. The base of the Endicotts is on the crystalline basement of the mantle under layers of partially metamorphosed Paleozoic sediments. Deposition of the Kanayuk Conglomerate begins on top of the middle Cambrian sediments of the Devonian Period and ends in the middle of the Mississippian sub-period of the Carboniferous Period. The conglomerate was sedimentary but has been partially morphed by the pressure of time. 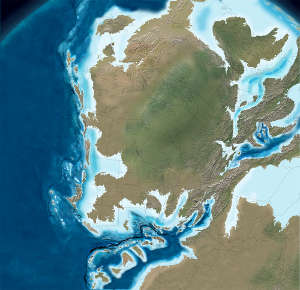 North America, 325 million years ago
Click or tap to see a larger version

It was time when ocean levels were very high and only the hearts of the major cratons of the day were above water. Surrounding the cratons were lagoons and extensive delta systems. The extensive continental platforms were below shallow seas and constant carbonate sediment deposition was the rule of the day.

The Devonian is classified as the Age of Fishes but land-based vegetation was beginning to evolve. By the middle Devonian, forests were common and as forests died and were buried, carbon was removed from the matrix and buried, too. That contributed to a decrease in atmospheric temperatures in the middle Devonian but by the end of the period, temperatures were hovering around 30°C again. Through the entire period, Alaska, as a land entity, existed only at the bottom of an ocean drainage. The major elements that make up Alaska today hadn't yet accreted to what is now the western shores of North America.