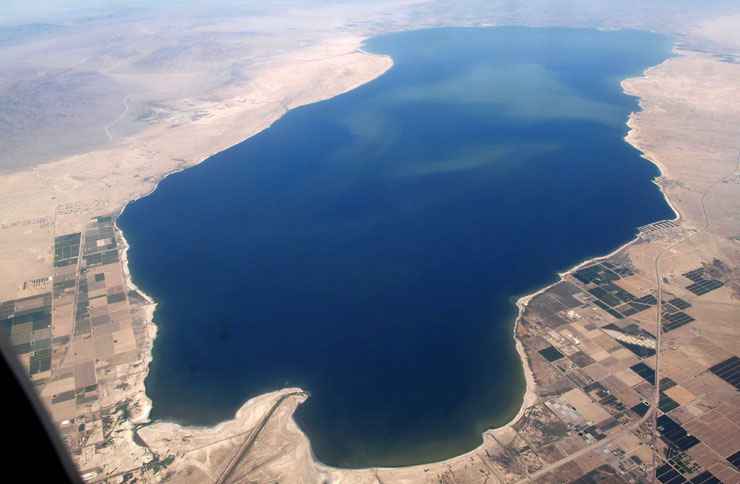 Aerial view of the Salton Sea

The Sonny Bono Salton Sea National Wildlife Refuge is composed of two separate units, both located at the southern end of the Salton Sea in California's Imperial Valley. This area is located 227 feet below sea level, and sees some of the hottest summer temperatures in the 48 contiguous states. This is the Sonoran Desert where May through October will often see days that top out at 116°F to 120°F daily.

The Refuge is in an area vital to migrating birds: the Pacific Flyway. The topography here is flat. The two separate units of the refuge are 18 miles apart and both contain tree rows, farm fields and wetland habitats. Near the Refuge Headquarters is an inactive volcanic cinder pile named Rock Hill, the only bump on the surface of the Earth for miles around.

The 32,766 acres of the Refuge were first set aside back in 1930. The New and Alamo Rivers flow across the Refuge, bringing fresh water to the larger body of water but time has so decreased the size of the Salton Sea that saline levels have built way up. Agricultural runoff and recent increases in the size of the Salton Sea have caused most of the original refuge property to be inundated by the salt waters. At this point, only about 2,000 acres are being actively managed as wetlands. 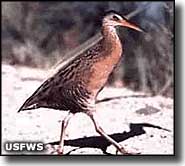 Among the objectives of the staff at the NWR is the production and maintenance of endangered and sensitive species. There is also significant effort put into maintaining wintering waterfowl and managing resources for other migratory birds. The endangered Yuma clapper rail lives here year round, as do the white-faced ibis, least bittern, American avocet and black-necked stilt. Because of the sensitive natures of these birds, the refuge is provided "Class 1" irrigation water by the Imperial Irrigation District. "Class 1" water is free of toxic pesticides, fertilizers and high levels of salts. Wetland management practices include the seasonal flooding of wetland areas. This helps in the growth of spangle-top grass, alkali bulrush, swamp timothy, wigeon grass, cattail and water grass, all plants that birds find favorable for food and cover.

The refuge personnel also manage tree rows of honey and screwbean mesquite, Mexican and blue palo verde, fairy duster, catclaw and sweet acacia, and desert ironwood. Part of the plan is to provide suitable forage for more than 30,000 wintering geese and other migratory birds. To that end, the refuge plants significant acreages in wheat, alfalfa, rye grass, millet, milo and sudan grass.

Depending on the season, 41 species of mammals, 4 species of amphibians, 18 species of reptiles and 15 species of fish have been recorded on the property. This is in addition to the more than 400 species of birds who pass through in the spring and fall migrations. At least 93 species of birds have been known to breed and nest on the refuge. From November to May is when you'll find the greatest number of species present.

The Rock Hill Trail and the Michael Hardenberger Trail are the only two walking trails offered. The Rock Hill Trail leaves from the Visitor Center and meanders for about a mile through several different habitats before it terminates at the top of Rock Hill. The Michael Hardenberger Trail is at the south end of the Salton Sea off Vendel Road. This is a 1/2 mile trail that wraps around a freshwater pond, a favorite nesting spot for endangered Yuma clapper rails.

The Salton Sea National Wildlife Refuge was renamed for Congressman Sonny Bono in 1998, in honor of his efforts to restore the health of the Salton Sea. 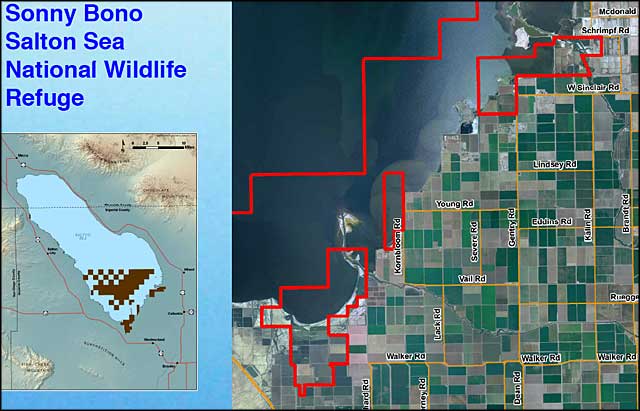