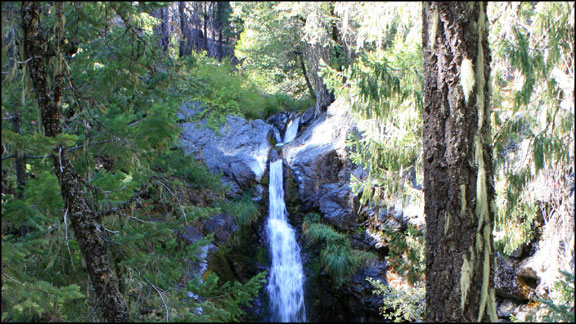 A waterfall in Snow Mountain Wilderness 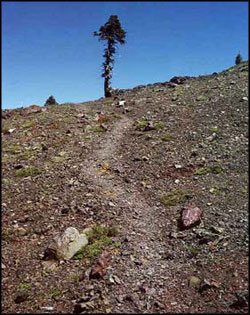 Snow Mountain Wilderness is a 60,077-acre property wholly contained within the boundaries of Mendocino National Forest. The Wilderness came into existence when the Wilderness Act of 1984 was signed into law by President Ronald Reagan.

The central feature of Snow Mountain Wilderness is a large, broad hump (Snow Mountain) that isn't really a peak, although it does offer several high points scattered around its mass. Snow Mountain is considered to be the southernmost peak in the North Coast Range. Elevations vary from about 1,800 feet in the bottom of the gorge of the Middle Fork of Stony Creek to 7,056 feet on the summit of East Snow Mountain Peak. The wilderness area is bound on all sides by deep canyons that create a unique biological sky-island.

There are about 42 miles of developed trails in the wilderness. The route to the summit of East Snow Mountain Peak is a relatively easy hike and offers views from Clear Lake on the southwest to the Sierra Nevada Mountains and Sacramento Valley on the east to the timbered Yolly Bolly Mountains on the north to the Coastal Ranges on the west. Vegetation in the area ranges from firs, pines and incense cedar in the crest zone to black oak and mixed conifers in the mid-elevations to thick chaparral in the lower regions. Among the animals found on the wilderness are black bears, blacktailed deer, mountain lions, eagles and hawks.

Most of the Snow Mountain Wilderness is underlain with sedimentary rocks (sandstone, shale, chert) formed during the Mesozoic era. The lower flanks of the mountains expose layers of sedimentary rock while the upper flanks expose layers of greenstone (mudstone, siltstone). In some areas are deposits of serpentinite, remnants of the original ocean crust or intrusions along the fault plane. Serpentinite is notoriously short on life-giving nutrients and soils of serpentinite tend to support only those plants that have adapted to it. The higher northern slopes were covered by glaciers during the last Ice Age and that action left many small, flat meadows behind. Today, depending on the level of ground depression, some of those areas are heavily vegetated wet meadows while others are dry, rocky and sparsely vegetated.

It's hard to find good drinking water on Snow Mountain Wilderness in the summer so you'll want to bring plenty of your own. If you're going to stay overnight you'll want to have a California campfire permit. Backcountry permits are not necessary to go hiking but the Forest Service does ask that hikers sign (and date) the register at the trailheads.