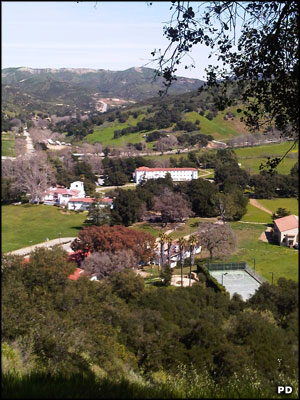 The Santa Monica Mountains National Recreation Area is a 156,670-acre property composed of many individual open space preserves and state, county, city and university parks, most located within the bounds of the Santa Monica Mountains in Los Angeles and Ventura Counties. The National Park Service controls 21,500 acres, the California State Park System owns 42,000 acres and the rest of the acreage is held in university study reserves, local agency parks and conservation easements on private property. Santa Monica Mountains National Recreation Area as a whole is the largest urban national park in America, spread across 5 area codes and 26 zip codes.

The first park dedicated in the area was Griffith Park, donated to the city of Los Angeles by Griffith J. Griffith in 1896. Multiple efforts were made to preserve more of the area as park land but those efforts consistently met with stiff opposition over the years. The next park dedicated in the area was Will Rogers State Historic Park in 1944. It took until Point Mugu Sate Park was established in 1967 for another large piece of land to be preserved. 5,800 acres was added to Point Mugu in 1972, then Topanga State Park was established in 1974. Between 1974 and 1975, the properties that now make up Malibu Creek State Park were purchased by the state. The Santa Monica Mountains National Recreation Area was established in 1978 and the Santa Monica Mountains Conservancy (a state agency dedicated to acquiring more land and expanding the parks in the area) began operations in 1980. In the 1990's, Bob Hope (the entertainer) tried to negotiate several deals to develop some high end properties in the area but met with conservationist opposition at nearly every turn. In the end, he donated a lot of his real estate in the area to the public. Some of the land that passed into his estate when he died was later acquired by the Santa Monica Mountains Conservancy and also added to the open space.

The highest peaks in the Santa Monica Mountains rise directly from the rugged coastline. The coastline offers narrow sandy beaches and rocky shores. Most of the canyons in the area are vegetated with dense chaparral and sagebrush. Inland, the countryside gets more grassy with large lone oaks scattered around.

Archaeologically speaking, there are sites in the Santa Monica Mountains that contain artifacts dating back more than 10,000 years. There are also 26 known Chumash pictograph sites in the recreation area, all sacred to today's members of the Native American tribe. Some of these are classed among the most spectacular pictograph sites found anywhere: the National Park Service describes them as a "unique and a significant world heritage." At least 73 sites in the recreation area are possible candidates for being listed on the National Register of Historic Places. Many others are eligible to be designated National Historic Landmarks while even more are present and potential California Historical Landmarks.

At 26876 Mulholland Highway in Calabasas is the Anthony C. Beilenson Interagency Visitor Center, operated by the National Park Service, Santa Monica Mountains Conservancy, California State Parks and the Mountains Recreation and Conservation Authority. At Rancho Sierra Vista in Newbury Park is the Satwiwa Native American Indian Culture Center, the only National Park Service site dedicated to the past, present and future of all Native American cultures.

The Interagency Visitor Center is open daily from 9 am to 5 pm except when it is closed on some federal holidays and Thanksgiving, Christmas and New Year's Days. Park lands are open 24/7/365 unless there is a fire or weather emergency in progress. The mountains are busiest in the spring, least busy in the summer. The beaches are busiest in the summer, least busy in the winter. The weather can vary radically from one side of a mountain range to another...

There are no fees associated with any of the National Park Service sites but other state, civic and federal agencies may have fees imposed on visitations to their properties. There are charges for camping in the park and for special use permits.