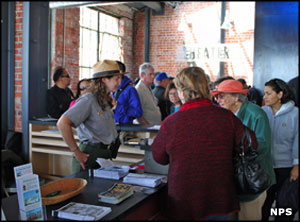 In the Visitor Education Center

Rosie the Riveter World War II Home Front National Historical Park is a "partnership park." That means the National Park Service owns no land or buildings connected with the park but does administer the park in conjunction with the city of Richmond, California. The park was established in 2000.

The park preserves and interprets sites like the Kaiser Richmond Shipyards, a tank factory, the Red Oak Victory ship, miscellaneous housing developments and other facilities developed during the war in support of the American war effort during World War II. The park particularly explores the roles of women and African-Americans in those war industries.

The idea to develop the Rosie the Riveter World War II Home Front National Historical Park began with the construction of the Rosie the Riveter Memorial in one of the city's shoreline parks. It was built to honor the women who made up a large part of the workforce during the war effort in those days. Richmond grew almost overnight from 24,000 people to 100,000 people as four shipyards were built and expanded to 27 shipways (that produced 747 ships) and 56 other support industries sprang up. That rate of growth overwhelmed the available roads, schools, housing, businesses and medical and community services in the area.

The visitor center is located in the former Ford Motor Company Assembly Plant that was built to produce tanks, jeeps and other military vehicles. The building has been restored and now houses a variety of private businesses in addition to the park visitor center. A short distance away is the former Kaiser Shipyard #2, site of the actual Rosie Memorial. There were 4 Kaiser shipyards built in Richmond and they were noted for their ability to complete Liberty and Victory ships in two-thirds the time and one-quarter the cost of the average of all the other shipyards operating in America at the time. As part of a special competition between shipyards, the SS Robert E. Perry was completed in less than five days. Normally though, a typical Liberty ship took a bit less than three weeks to build and launch. On display nearby is the SS Red Oak Victory, one of 414 Victory ships built in Richmond. Throughout 1945, the ship handled cargo and munitions for various ships in the Pacific Theatre. The SS Red Oak Victory also saw service during the Korea and Vietnam conflicts before being retired in 1996.

Henry Kaiser, founder of the Richmond Shipyards, also built the Kaiser Richmond Field Hospital (financed by the US Maritime Commission) in an effort to reduce the number of health-related problems his employees were dealing with (between 1941 and the invasion of Normandy, more Americans were dying as a result of industrial accidents in home front factories than were dying on the battlefields of the war). The hospital offered Kaiser's employees a group medical practice, prepaid insurance plans and large, comprehensive medical facilities. As a voluntary group plan, it was extremely successful and is still operating under the name "Kaiser Permanente" as the country's largest non-profit HMO. The original hospital was built as a single-story wood frame structure and was in operation until it was replaced by a new hospital built in downtown Richmond in 1995.

Kaiser also sponsored the Maritime and Ruth Powers Child Development Centers to provide child care for the women working in his shipyards. These were only two of maybe 35 nursery/day care centers operating in Richmond during the war but these two are the only ones whose buildings still exist.

Central to the park is the Lucretia Edwards Shoreline Park where other memorials are located that point to (and interpret) the locations of other World War II shipyards in the Bay Area.

The Rosie the Riveter Visitor Education Center is open daily (except Thanksgiving, Christmas and New Year's Days) from 10 am to 5 pm. The Rosie the Riveter Memorial is located in Marina Bay Park and is open year round, sunrise to sunset. The Red Oak Victory Ship is generally open for tours from 10 am to 3 pm on Tuesdays, Thursdays, Saturdays and Sundays - dependent on the availability of volunteer staff and good weather. As the various units of the park are also Richmond city parks, there are no fees involved. There's not a lot of signage in the various park areas so locating different units can be difficult if you aren't familiar with the city of Richmond. 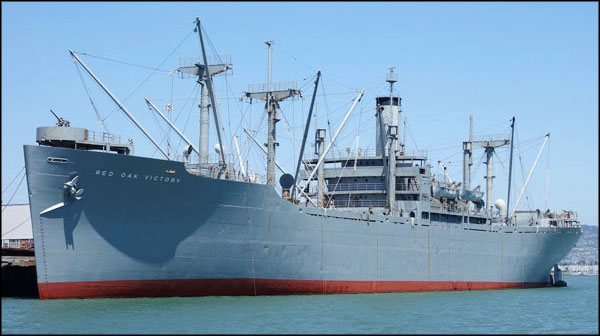