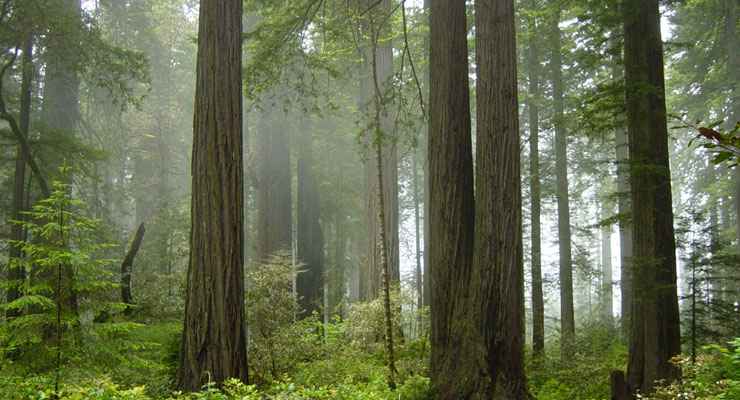 Fog in the redwood forest 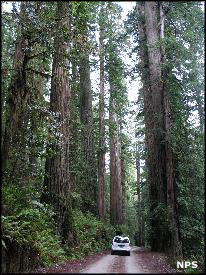 A minor gold rush occurred in northern California around 1850. It didn't last long but it brought a lot of miners into the area. When there turned out to be very little gold involved, a lot of miners became lumberjacks and started harvesting the big trees to supply the growing population in other parts of California. At that time, there were more than 2,000,000 acres of large redwoods in northern California and southern Oregon. The logging went on unrestricted for years but a conservation effort began in earnest in 1918 and resulted in the creation of several state parks in the 1920's designed to preserve some of the old-growth forest. Due to heavy lobbying in Congress by major lumber companies, the federal government didn't get involved until Redwood National Park was established in 1968. By that time, more than 90% of the redwood forest in northern California had been clear-cut. In 1978, the National Park Service added 48,000 acres to Redwood National Park (some of which had previously been logged) and in 1994, entered into an agreement with the California Department of Parks and Recreation to manage the national park and the state parks cooperatively. Among them the parks contain about 133,000 acres and about 45% of the remaining coast redwoods on Earth. The United Nations designated the parks a World Heritage Site on September 5, 1980 and an International Biosphere Reserve on June 30, 1983.

There is evidence of human habitation in the area going back about 4,500 years. When Jedediah Smith explored the area in 1828, there were four main tribes in the area, the Yurok being the most numerous. The influx of miners to the area in the 1850's was disastrous for the Native Americans. By 1895, the Yurok had been reduced to about one-third of their original population. By 1919, the Chihula tribe had essentially disappeared, the last few members assimilated into one of the other tribes. The history is an ugly one, filled with butchery and debauchery on the part of the newcomers. In some cases, the slaughter was funded by the state government. Congress would sometimes sign treaties and offer reservations but the California Congressional delegation lobbied against them, forcing the nullification of any treaties. So reservations were only established by administrative decree. What that means is the tribes have been almost completely displaced and there is little federal recognition of their sovereignty as individuals or as tribal units. However, the tribes adapted and have survived. There is a Yurok reservation that runs upstream along the Klamath River for about 40 miles. The Tolowa also have a couple rancherias in Del Norte County. None of the tribe members have adopted a full "mainstream American" way of life but none are living the fully traditional path either.

In the early 1900's, hunters had reduced the Roosevelt elk population of the western states almost to extinction. In an effort to save the species, California designated an elk refuge at what is now Prairie Creek State Park and made a place of safety for the maybe 120 elk still alive in northern California in 1923. The herd has done very well since then and you might find elk almost everywhere in the park, especially in the areas south of the Klamath River.

The Redwood National and State Parks area is also justly famous for the whale watching opportunities. There is a small resident population of whales that can be seen at any time of year from the Klamath River Overlook but most gray whales migrate just offshore in November-December and March-April. There are good overlooks for whale watching at several high points along the coast. 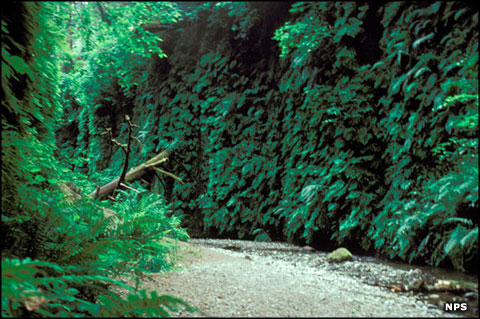 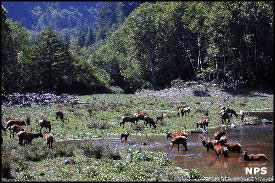 Entry fees: Redwood National Park is free to everyone but Jedediah Smith, Del Norte Coast and Prairie Creek Redwoods State Parks collect fees at the campground entrances. Between late May and early September, reservations are strongly recommended at all campgrounds. Designated back country campsites are available, permits to access are free but there is a $5 per site/per night fee for camping.

As for developed campgrounds, there are four of them: three in the redwoods, one on the beach. All tend to be open in the summer only (early May through early September) and all charge $35 per site/ per night.

Among the parks, there are more than 200 miles of developed trails. The trails are open year round but some of them have temporary bridges that are removed in the rainy season (meaning: winter). The various parks also offer several gorgeous scenic drives (along former logging roads) but most are unpaved and nearly all are not recommended for motorhomes/RVs or vehicles towing trailers.

All fees quoted are subject to change. 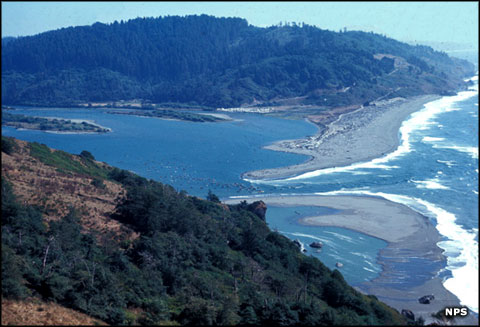