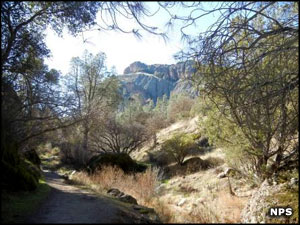 Pinnacles National Park is a 26,606-acre property located east of the Salinas Valley in central California. The name comes from the heavily eroded leftovers of the western half of an ancient volcano.

Over the last 23 million years, the western half of the volcano has moved about 195 miles from its original position along the San Andreas Fault due to the slippage of the tectonic plates beneath: the eastern half of the ancient volcano is close to Lancaster. The scientific establishment of the relative movement between the Pinnacles and the other half of the Neenach Volcano remnants were a significant factor in the acceptance of the concept of plate tectonics in geology. Seismic activity is still regular in the park, even though the main line of the San Andreas Fault is now located about four miles east of the eastern boundary of the park. The old fault line is still present as the Chalone Creek Fault.

The park is divided into East and West sections that are connected by foot trails. There are no through roads connecting one entrance with the other. The East side offers shade and water, the West side offers high rock walls, spires and pinnacles that attract rock climbers in herds. Pinnacles National Park also has some unusual talus caves, some of which house up to 13 different species of bat. Pinnacles also offers prime habitat for prairie falcons and serves as a release site for California condors that have been bred in captivity.

At first, the area was known as "Palisades" but the name had been changed to "Pinnacles" within 10 years. Interest in the area grew until President Theodore Roosevelt established the Pinnacles Forest Reserve in 1906. Roosevelt then changed that designation to Pinnacles National Monument in 1908 and it remained with that name until legislation was signed by President Barack Obama converting the National Monument into Pinnacles National Park on January 10, 2013.

Pinnacles National Park is in the southern portion of the Gabilan Range of California's Coast Ranges. It's about 80 miles south of the San Francisco Bay area and about 40 miles inland from the Pacific Ocean, east of the Santa Lucia Mountains which block much of the climate moderating effects of the ocean. That means temperatures can vary by more than 50°F on any one day. Elevations in the park range from 824 feet to 3,304 feet at the summit of North Chalone Peak. Average rainfall is around 16 inches per year and snow can fall on some of the higher elevations in the mid-December to first-of-February window.

Pinnacles is located in an area of California known for its high summer temperatures. Most people visit in spring and fall because of that. A majority of the land mass of Pinnacles National Park (some 15,985 acres, more than 80% of the park) is included in the Hain Wilderness (named in commemoration of Schuyler Hain who had been instrumental in getting the property to National Monument status).

The east side of the park has most of the developed areas while the west side has most of the rock climbing routes. There are a number of developed trails on the property, some steep enough that rails and fences are necessary to help hikers navigate the slopes. There is a lone campground on the east side. A couple of the larger talus caves are open to the public seasonally but the caves are also sometimes flooded in times of high water.