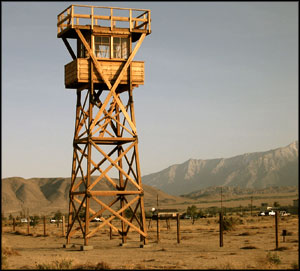 Manzanar is the site of a town in the Owens Valley settled by ranchers and miners in 1910, then fully abandoned by 1934 after the City of Los Angeles bought up all the water rights in the area. Prior to that, the Manzanar area had been home to several villages of Owens Valley Paiutes but after the Owens Valley Indian War of 1861-1863, about 1/3 of them were forced to walk 200 miles to Fort Tejon at gunpoint by the US Army. Shortly after, many returned to the Owens Valley just in time to greet incoming Anglo-Americans intent on settling in their valley.

As early as 1905, the City of Los Angeles began secretly buying water rights in the Owens Valley. By 1913 they had completed construction of the Los Angeles Aqueduct, a 233-mile-long ditch carrying water from the Owens River to Los Angeles. By 1920, they had realized the river water wasn't enough so they began buying out individual farmers and ranchers. Some made enough on the sale that they became independently wealthy and relocated with ease. Others chose to stay and continue working their farms and fruit orchards. However, in dry years, Los Angeles pumped water out of the aquifer and diverted all the surface water to their aqueduct and the Owens Valley farms and ranches began to dry up. By 1929, all the water rights in the area of Manzanar were owned by Los Angeles and by 1934, it was over (except for the crying) for the town of Manzanar...

...until the United States Army leased 6,200 acres from the City of Los Angeles in 1942 to use as a "relocation center" for the internment of Americans of Japanese descent. Between 1942 and 1945, the government constructed ten such "relocation centers" inland from the coast and incarcerated more than 110,000 people in them. Manzanar was the first to be established and is now the camp in best condition. At its peak, Manzanar held 10,046 incarcerees and a total of 11,070 people passed through the camp in those years.

The camp was constructed in a very temporary fashion and the buildings were not nearly adequate to shield people from the weather. Summer temperatures in the Owens Valley usually exceed 100°F and winter temperatures often drop below freezing. The area is very dry and very windy... which means never-ending problems with dust: people would wake up every the morning covered in a fine layer of dust.

Manzanar suffered the usual problems of an American concentration camp (civil disturbances about wage differences, intergenerational friction because of the crowded conditions and utter lack of privacy, rumors of FBI informers, etc.) but also suffered what became known as the Manzanar Riot on December 5-6, 1942. The problem started because of internal tensions among the Japanese but blew up when military police started lobbing tear gas into a crowd of protesters. Some ran from the tear gas, some turned and pushed a driver-less truck toward the jail hoping to free one of their leaders. To stop the truck, the MPs began firing into the crowd, killing a 17-year-old boy on the spot and wounding a 21-year-old man who died several days later. Nine other incarcerees were wounded, as was one military police corporal who was hit by a ricocheting bullet. The whole thing began over allegations of camp staff stealing rationed sugar and meat to sell on the black market and, as guilty as they were shortly proven to be, none were ever punished for it.

The camp was finally closed on November 21, 1945 and everyone was told to get out. Nearly all had to find their way to somewhere else on their own. Many refused to go because everything they had had before the war had been stolen by their former neighbors or by the government while they were incarcerated. Within a couple years of abandonment, nearly all the structures had been removed except for two sentry posts at the entrance to the camp, the cemetery monument and the former Manzanar High School Auditorium. Inyo County bought the auditorium and leased to to a VFW post for several years, then it was used by the county road maintenance crews.

As of 2003, all that was left were numerous building foundations, portions of the water and sewer systems, the outline of the road grid, some of the landscaping constructed by the incarcerees, a few items from the days when Manzanar had been a real town and a few artifacts from the days of the Owens Valley Paiutes.

Today's Manzanar National Historic Site contains about 814 acres of land. The old high school auditorium was restored and now contains an interpretive center with a permanent exhibit that tells the stories of the Owens Valley Paiutes, the miners and ranchers, the water rights in the Owens Valley and the incarcerees at Manzanar. The site also features the restored sentry posts at the entrance, a guard tower replica (built in 2005), a self-guided tour road and informational markers. A restored World War II mess hall was moved to site from the Bishop Airport and was opened to visitors in 2010. A couple of the barracks in the residential blocks have been reconstructed, one showing what is was like when the Japanese first arrived in 1942, the other what it was like near the end of the camp in 1945.

Manzanar National Historic Site is open every day from sunrise to sunset. The Visitor Center is open daily (except Christmas Day) from 9 am to 4:30 pm. There is no entrance fee involved. 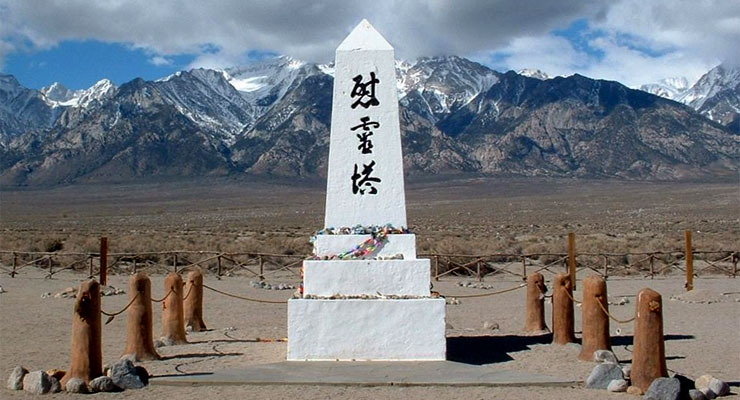