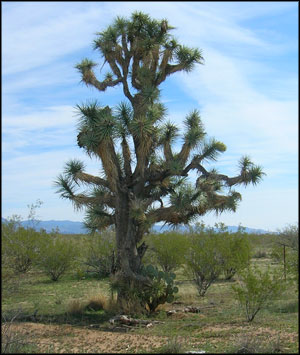 Joshua Tree National Monument was created in 1936 to preserve and protect vast areas of Mohave Desert vegetation and countryside. The National Monument became a National Park in 1994 and now contains almost 800,000 acres within its boundaries. Scattered across all that countryside you'll find 88 historic structures, 501 archaeological sites and 19 cultural landscapes. The museum at Joshua Tree contains some 123,2453 items that have been found on the property.

Joshua Tree National Park straddles the boundary of the Colorado Desert (to the east) and the Mohave Desert (to the north). The southwestern part of the park includes several mountain ranges. A large part of the property is above 4,000' in elevation.

Humans have occupied the area in waves, the first beginning between 4,000 and 8,000 years ago with the folks of the Pinto Culture. The Pinto people left behind large quantities of stone spear points, indicating they were most likely a nomadic culture that lived mostly by large game hunting and seasonal plant gathering. Back in those days the area tended to be cooler and wetter but as time went on, the climate heated up and the humidity went down. There is little evidence that the Pinto Culture was connected with the later Cahuilla, Chemehuevi and Serrano Cultures so after the Pinto disappeared, there was probably a large gap in time before new people migrated in. And those new people came with distinct changes in their stone tooling and increased numbers of hard-seed milling stones, indicating more diversified strategies for the hunting and collecting of food items.

The Cahuilla and Serrano people were in the Joshua Tree area a long time. They tended to settle in areas of reliable water sources, the Cahuilla in the south, the Serrano in the north and west. The Chemehuevi migrated in about 400 years ago, mostly settling in the eastern areas and slowly migrating downhill to the Colorado River Valley. War broke out between the Chemehuevi and Mojave in 1867 and the Chemehuevi retreated to the oasis at Mara (now known as Twentynine Palms) for a few years. That had previously been occupied by the Serrano but many of them had died in a smallpox epidemic and the oasis was nearly abandoned. As relationships in the area changed, the Chemehuevi began to migrate back down to the Colorado River area until today, the major part of the tribe lives on the Chemehuevi Reservation against the river. While the Serrano and Cahuilla tended to remain relatively stationary, the Chemehuevi broke into small groups and went on seasonal hunting and gathering forays in the spring, summer and fall, then gathered in large villages for the winter.

The Serrano were the first settlers at the Oasis of Mara, told by a medicine man they should move there because it was a good place to live and they'd have many boy babies. They were also told to plant a palm tree each time a baby boy was born and they planted 29 palms in their first year at the oasis. The first American survey parties arrived at the oasis in the 1850's and found the area under cultivation as the Serrano grew beans, pumpkin, corn and squash on the water rising through springs sourced along the Pinto Mountain Fault. By 1870, the area was seeing an influx of prospectors looking for minerals and mining operations began a few years later. That led to the cutting of trees at the oasis and the siphoning off of the water. The mines didn't last long but they were followed by an influx of cattle ranchers, coming to take advantage of the high desert grasslands in the Little San Bernardino and Pinto Mountains. Slowly those ranchers began to build homes at the oasis. That began to displace the Native Americans and by 1913, there were no natives left.

The end of World War I saw a lot of veterans coming to Twentynine Palms to take advantage of the heat and the arid climate: better for their poison gas-affected lungs. After Joshua Tree National Monument came into being in 1936, tourism began to ramp up. The Twentynine Palms Corporation donated the Oasis of Mara to the National Park Service in 1950 for use as their headquarters and primary visitor center and tourism increased further. 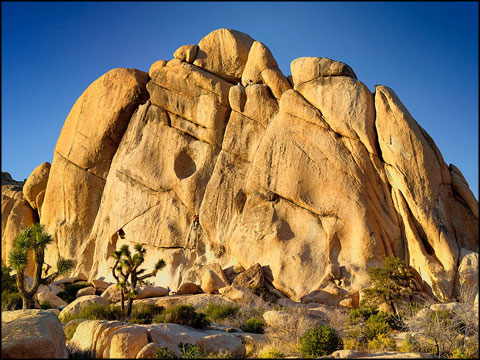 About 80% of Joshua Tree National Monument was designated wilderness in 1976 based on the principles of the Wilderness Protection Act of 1964. Becoming a National Park added more acreage to the whole. The California Desert Protection Act of 1994 added 163,800 acres to that wilderness area bringing the total amount of designated wilderness on Joshua Tree National Park to 585,000 acres. The park itself contains some 790,636 acres. Most roads in the park are unpaved and require high clearance in the best of times. In the worst of times, high-clearance and excellent 4WD might not be enough... it seems people die almost every year in some part of the park they shouldn't have been in with a typical low-clearance city vehicle. 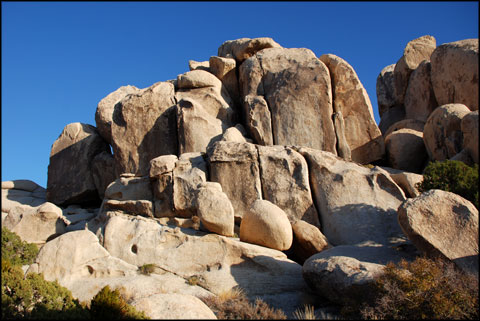 The park offers several hiking trails, most of them beginning at one campground or another. The park also attracts large numbers of rock-climbers and boulderers as thousands of climbing routes on excellent granite are within easy hiking distance of many of the roads. A problem with this is the vast increase in the amount of graffiti on display, an increase park personnel blame on the increase in social media use and the relatively close proximity of the park to some 18 million Americans... 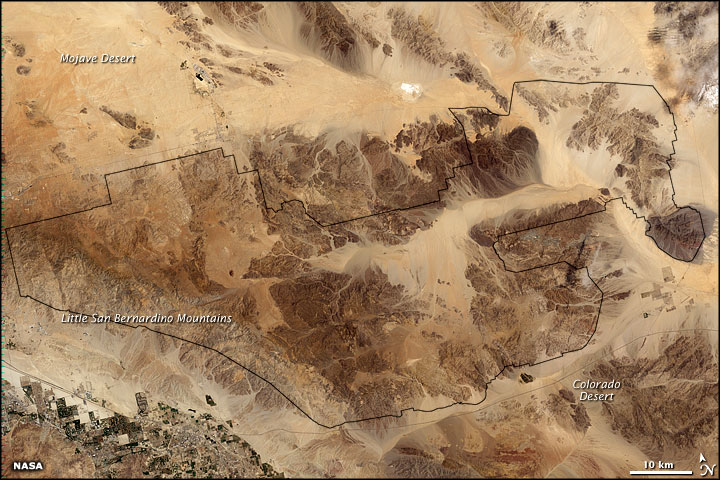