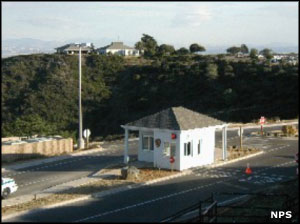 Cabrillo National Monument marks the site where Juan Rodriguez Cabrillo first stepped foot in California in 1542 and thereby became the first European to land on what is now the West Coast of the United States, just barely... Cabrillo National Monument has the added distinction of being the most southwesterly point in the contiguous states. Because the national monument includes Point Loma and the Old Point Loma Lighthouse, the views of San Diego and the surrounding area are superb. A bit south of the old lighthouse is the Whale Overlook, a vantage point that offers views of the New Point Loma Lighthouse and whales during the annual migration in January and February. Cabrillo National Monument also offers a Visitor Center with exhibits, films and ranger-guided programs about the history of Cabrillo.

Juan Rodriguez Cabrillo was one of the original conquistadors in the army of Hernan Cortes, the folks who conquered the Aztecs and claimed most of the New World for the King of Spain. His name first appeared in the historical journals in 1519 when he served as a captain of crossbowmen in the conquest of Mexico. After the Aztecs were defeated, he explored southern Mexico, Guatemala and El Salvador with other Spanish military expeditions and eventually settled in Guatemala where the king had granted him encomiendas (long term leases for land uses like farming and gold mining, along with the right to use forced Indian labor in his projects). In 1532 he returned to Spain and met and married his wife, Beatriz Sanchez de Ortega. She returned with him to Guatemala and later bore two sons. By the mid-1530's he had established himself as a leading citizen of Santiago, the largest city in Guatemala.

In 1540, a major earthquake destroyed Santiago. The report Cabrillo wrote for the King of Spain is credited as being the first piece of secular journalism written in the New World. During those years Cabrillo also built a reputation as a ship builder using skilled craftsman he brought back from Spain to direct the forced Indian labor that actually built the ships. He used the ships he built to import and export goods between Guatemala, Spain and other areas of the New World.

In 1542, Pedro de Alvarado, the Governor of Guatemala, commissioned Cabrillo to build and provision ships to explore the Pacific. The plan was to establish a trade route between Central America and the Spice Islands. Not long after, Alvarado was killed during an Indian uprising. His business partner, Antonio de Mendoza (the Viceroy of New Spain) then prompted Cabrillo himself to lead one of the two planned expeditions to explore the Pacific. Cabrillo led a group of three ships that sailed north along the Pacific coast while Ruy Lopez de Villalobos commanded the expedition that sailed straight west to the Philippines. Villalobos reached the Philippines but was killed shortly thereafter when his crew mutinied. His crew later surrendered to a Portuguese garrison in the Spice Islands and nothing ever came of the venture.

Cabrillo and his expedition sailed out of Navidad (near modern-day Manzanillo) and headed north on June 24, 1542. Three-and-a-half months later, the expedition entered San Diego Bay. Cabrillo disembarked to claim the property and named the place "San Miguel." 60 years later, Sebastian Vizcaino came by and changed the name to "San Diego." Cabrillo's expedition continued north to Monterey Bay and might even have reached Point Reyes before worsening storms forced them to turn back. They returned to the Channel Islands and settled there for the winter but during a brief skirmish with local Native Americans, Cabrillo suffered a fall and shattered one of his limbs. He died of complications on January 3, 1543. His crew set sail a few days later headed north again. They might have made it as far north as the Rogue River in Oregon but between the nasty storms and the spoiled provisions, they lost heart and headed back to Guatemala. Nowhere along the way did they see San Francisco Bay, that wasn't discovered by the Spanish until 1769.

Cabrillo's contemporaries in Guatemala considered his expedition to be a failure but he left the first written records of Spanish explorers in California and his efforts served to assist others in the eventual colonization of the expanded Spanish Empire.

Also on the grounds of Cabrillo National Monument is the Old Point Loma Lighthouse and the remains of Fort Rosecrans, a coastal defensive installation built to protect the approaches to San Diego Harbor. Between 1918 and 1943, the Army built fire control stations, searchlight bunkers and gun batteries in the area. The largest guns were capable of fire 2,300-pound shells as much as 30 miles out to sea. In the old radio station building visitors will find "They Stood the Watch," an exhibit that shares the story behind the military remains. 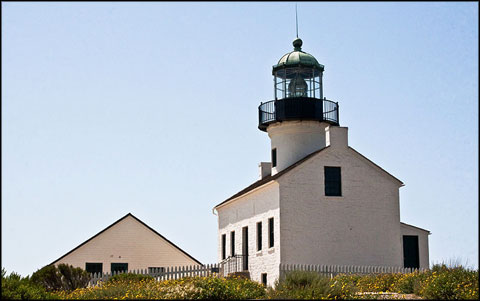