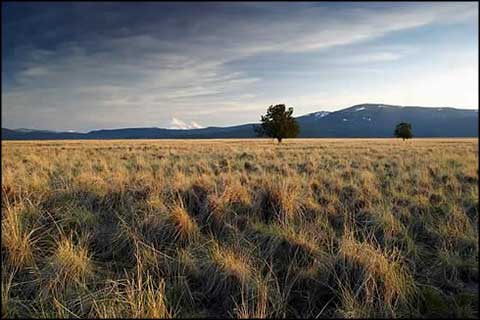 Butte Valley National Grassland is an 18,425-acre property in far northern California. The grassland is located in the Klamath River basin between the communities of Macdoel and Dorris along US Highway 97. This is an area that attracted homesteaders in the late 1880's who farmed the land in a manner that quickly depleted the soil. That was exacerbated by the 1930's drought to the point a lot of folks just walked away and the land reverted to the Federal Land Bank.

The federal government started buying up the non-productive lands starting in 1937 and put them in the hands of the Soil Conservation Service (which later became the Natural Resources Conservation Service) who quickly moved to plant more than 4,000 acres of crested wheatgrass. After that, cattle and sheep grazing was allowed. For a bit during World War II the property also doubled as a practice bombing range for the Army Air Force. The grazing continued until the Grassland designation was handed down in 1991. Currently, the grassland is vegetated with rabbit brush, open sagebrush, juniper and native bunch grasses. The most popular recreational activity on Butte Valley National Grassland is bird watching...