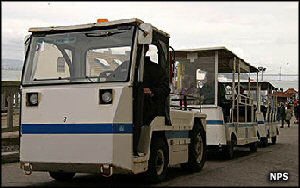 With an ideal location in San Francisco Bay, Alcatraz Island was the site of the first lighthouse and first US-built fort on the west coast of America. Then it became the home of an infamous federal penitentiary, long off-limits to the public. After the prison was closed and the prisoners shipped elsewhere, the Rock became the site of a 19-month-long occupation by Indians of All Tribes, an occupation which has been credited with saving the tribes. All that history has obscured the fact that the Rock is also a place of beautiful tide pools, gardens, bird colonies and incredible views of nearly all of San Francisco Bay.

In 1850, President Millard Fillmore declared the island to be a military reservation but troops weren't permanently garrisoned there until 1859. The Rock served as a military installation until 1934 when it morphed into the famous penitentiary. The main portion of the fortress was built before the Civil War began. The location was ideal because nothing could move into the bay without coming within one mile of the fort's cannons. Construction was hard, though, because it was hard to hire labor to work on the fortress and harder still to find suitable building materials. In the end, most of the granite that makes up the fortress walls was imported from China. The commander at the time was Colonel Albert Sidney Johnston and he faithfully held the fort for the Union until he resigned his commission and returned to his native South. Once there he accepted a commission in the Confederate Army and died shortly thereafter at the battle of Shiloh.

Once the Civil War began, forces were kept on high alert as San Francisco was a tempting target for the Confederacy. The first real threat came up in March, 1863. A group of Confederate sympathizers planned to arm a schooner, take over a steamship and raid commerce in the Pacific. They also wanted to blockade the harbor and lay seige to the forts. Their scheme was well advanced when their captain was overheard bragging about his role in a local tavern. On the night they gathered to sail, the US Navy appeared and seized the ship, arrested the crew. The schooner was towed to Alcatraz where an inspection turned up ammunition, cannons, supplies and 15 more men hiding on board. One of those men was a prominent resident of San Francisco and he had papers signed by the Confederate President assuring him of an officer's commission in the Confederate Navy when he had successfully completed the mission. The three ringleaders of the plot were arrested and quickly tried and convicted of treason. They were confined in the Alcatraz guardhouse basement until President Lincoln pardoned them and saved them from ten years of imprisonment.

Almost from its beginning as a military installation, Alcatraz served as a prison. In 1861, Alcatraz became the officially designated military prison for the Department of the Pacific. Other military installations up and down the West Coast sent their escapees, thieves, drunkards and deserters to Alcatraz. Through the late 1800's there tended to be an average of 100 prisoners on the Rock at all times.

During the late 1800's, many Native Americans were sent to the Rock. Some of them had previously been scouts for the Army, others were tribal leaders who refused to knuckle under to various government demands. In some cases, older Native Americans were hanged and younger ones imprisoned. In January 1895 nineteen Hopi elders were sent to Alcatraz. They were all village leaders engaged in land disputes with the government but they were supposedly imprisoned because they refused to comply with a government mandated education program for the tribe's children. There was no time limit set on their sentences but all were released after they pledged to "cease interference with the plans of the government for the civilization and education of its Indian wards." And the "land disputes" were in actuality a refusal to farm the way they were being taught to farm by government employees: after hundreds of years in the desert, the Hopi had learned to farm in a manner that worked well in their countryside and the government methods would have failed miserably, leaving their people to starve.

The Spanish-American War brought new challenges to Alcatraz as the hospital was filled to overflowing with returning soldiers infected with various contagious tropical diseases. At the same time, the prison population of Alcatraz ballooned from 25 to 441 between 1899 and 1900. In 1907 the island was redesignated the "Pacific Branch, US Military Prison, Alcatraz Island" and the real conversion of the place from defense installation to penitentiary began in earnest. Many sections of the former fort were torn down and rebuilt into cellblocks. By 1912 when the main construction was completed, the prison complex was the largest reinforced concrete building on Earth. The mission was changed from "Military Prison" to "Disciplinary Barracks" in 1915 and the focus switched from incarceration to education and rehabilitation. At the same time, the public began to disapprove of the stark landscaping the Army had done on the island and that led to the planting of lawns, trees, shrubs and many gardens.

By the time of the Great Depression, the location of the facility led to the Army abandoning the property and moving most of their prisoners to Fort Leavenworth in Kansas or Fort Jay in New Jersey. In 1933 they transferred custody of their 32 worst prisoners to the federal Bureau of Prisons and transferred the deed to Alcatraz with them. That's when the era of the infamous maximum security prison began. And as much as Hollywood has focused on only a few of the more famous civilians incarcerated at Alcatraz over the years, the majority of prisoners there were from the military. Alcatraz was finally closed by the Bureau of Prisons in 1963 and the remaining prisoners were transferred to the Maximum Security Prison at Marion, Illinois.

The famous Native American occupation of Alcatraz Island began with a four-hour visit by five Sioux on March 9, 1964. During that visit, Richard McKenzie (the leader) demanded that the island be turned over to the tribes for use as a cultural center and for the construction of an Indian university. Those same demands were uttered almost word-for-word in the later occupations.

Another group of Native Americans led by Richard Oakes returned and symbolically claimed the island on November 9, 1969. As many different tribes were represented in the group, they adopted the name "Indians of All Tribes." They left peacefully a few hours later thinking they would return that same evening. However, that return didn't happen until November 20, 1969 and that return lasted until June 11, 1971. Among the approximately 100 people in that group, about 80 were Native American students from UCLA. They were well organized at first but as the next school semester approached, their organization began to fall apart and many left the island to return to school. They were replaced by other Native Americans from other urban areas and from various reservations across the country.

The federal government responded by staying clear of the island and not interfering or trying to remove anyone from the island. Their plan was to wait it out in hopes the Native Americans would settle for less than they demanded and return quietly to wherever they had come from. There was a problem with this: official Bureau of Indian Affairs policy was to terminate the members of many tribes across the country and remove them from the reservations they had been granted in perpetuity by previous administrations. Eventually, the situation on the island deteriorated to the point where a federal task force was able to successfully overrun the island and safely remove the last remaining Native Americans.

Among the demands made by the Indians of All Tribes, demands that never changed were the return of certain properties that had been stolen by the government, the end of the national termination program, the building of an Indian university and the right of self-determination for the tribes. During the time of the occupation, President Nixon returned Blue Lake and 48,000 acres of sacred land around it to the Taos Indians. Occupied lands near Davis, California were dedicated for the building of an Indian university. An occupation of Bureau of Indian Affairs offices in Washington DC led to the hiring of Native Americans to work in that agency that had long had major impacts on their lives (the commander-in-chief of the US Army in the mid-1890's once wrote "There has been no branch of the government so corrupt and disgraceful to the Republic as that which has had the management of our Indian affairs."). So while Alcatraz Island may have been lost, the political movement birthed there continues today and offers new hope for all the various tribes and their people.

Native American groups such as the International Indian Treaty Council still hold ceremonies on the island, usually as "Sunrise Gatherings," every Columbus Day and Thanksgiving Day.

Visitors to Alcatraz today are offered several methods of experiencing the island, including numerous free programs about a variety of topics: military history, escapes, natural history, the Native American occupation, etc. Touring the penitentiary is a partially self-guided experience. There is no set time for a visit but everyone must be off the island when the last ferry of the day departs. Ferries do leave every half-hour or so all day.

Day tours tend to dock immediately on the island and discharge passengers. The evening tours circle the island first while a live narration of the island's history happens. Then the ferry docks and everyone receives a guided tour from the dock to the cellhouse where a number of other special tours, activities and cell-door demonstrations are offered throughout the evening. However, some areas of the island that are open during the day are not open in the evening due to safety concerns. Evening tours are usually available Thursday through Monday while day tours are available almost every day.

As no private crafts are allowed to dock at Alcatraz Island, access is only via ferry service operated by Alcatraz Cruises, LLC, a concession of the National Park Service. The ferry departs from Pier 33 on The Embarcadero and you'll want to purchase your tickets well in advance of your visit. There is no entrance fee to the island and park passes do not apply to the ferry charges. The ferry ticket price includes the ferry service, the cellhouse audio tour provided by the Golden Gate National Parks Conservancy and the Federal Lands Recreation Enhancement Act fee.

Hours of operation vary with the seasons but the ferry starts its daily schedule at 9 am, every day except Christmas Day, New Year's Day and Thanksgiving Day. Depending on the season, the ferry service also offers evening tours and combined Alcatraz-Angel Island tours. 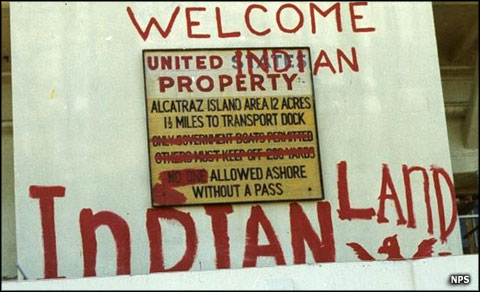