The Arkansas River Valley from the summit of Petit Jean Mountain 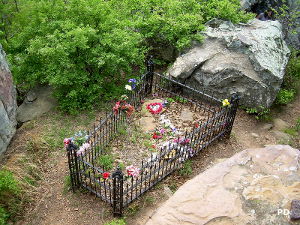 Petit Jean State Park is Arkansas' oldest state park, composed of the woodlands on and surrounding Petit Jean Mountain. On the property are the sheer limestone bluffs of Cedar Creek Canyon and the Seven Hollows, Bear Cave, the Grotto, Turtle Rocks, Carpet Rocks and Natural Bridge. Most of the facilities at Petit Jean State Park were built in the days of the Civilian Conservation Corps and the buildings have been maintained to reflect that heritage.

The name (Petit Jean) comes from a legend dating back to the days of French exploration of the New World. The legend says Petit Jean was a nobleman's fiancé who disguised herself as a cabin boy and made the journey to New France without anyone discovering her real identity. Once here, the ship ascended the Mississippi, then the Arkansas and landed at the foot of what is now Petit Jean Mountain. The sailors and explorers spent that summer exploring the area and hanging out with the local Native American tribe. However, when it came time to embark and leave, Petit Jean grew ill. At that point her true identity was discovered and she begged forgiveness of her fiancé who was in charge of the expedition. She also asked to be buried on the mountain should she die. She died later that day at sundown and was buried atop the mountain. The reality of the story is more likely tied to the accidental death of a young French nobleman who was part of Robert Cavelier de la Salle's doomed colonization attempt of 1684-1687.

Many years later, the Fort Smith Lumber Company owned the mountain and a lot of land around it. Executives of the company decided the mountain was too hard to log, so someone proposed giving the property to the Federal government to be made into a park. In 1921, a bill was presented in the House of Representatives to create Petit Jean National Park. The House decided the property was too small and would cost too much to develop so the promoters were told to present their proposal to the state legislature. In 1923, an 80-acre property was designated as the beginning of Petit Jean State Park, the rest to be added later. The CCC arrived in 1933 and spent the next five years building some of the finest examples of CCC work in the country on the property.

Today, Petit Jean State Park is composed of some 3,471 acres. In the heart of the property is the canyon carved over the millenia by Cedar Creek. The park's campground offers 125 individual campsites, all with water and electrical hook-ups. 35 of the sites also offer 50 amp electrical service and sewer hook-ups. 26 of the sites are pull-through. The campground is split into four areas, each having its own bathhouse with flush toilets and hot showers. There is also a rally-style group camp area with 44-units and 20-amp electrical service. The 50-amp sites run $28 per site per night while the 30-amp sites run $18 per site per night. Petit Jean State Park also has its own aircraft landing strip with another five tent camping sites located near the runway.

Petit Jean State Park also usually offers a lodge and cabins. The lodge is closed through 2011 for renovations but all 21 fully equipped cabins are available for rent. There are also six overnight duplex cabins (with fireplaces but no kitchens) available. Rents on the cabins vary from $75 to $175 per cabin, per night. Fees are subject to change. 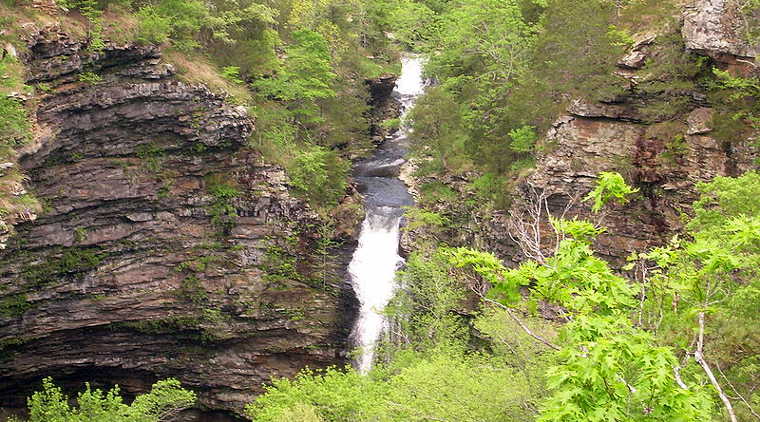