One of the lakes at Mount Magazine State Park

Mount Magazine State Park consists of 2,234 acres of Ozark National Forest lands atop the flat-topped Mount Magazine. The mountain sits between the Arkansas River to the north and the Petit Jean River to the south. A remnant of an ancient sea floor, the mountain stretches almost six miles east and west and up to a mile across north and south.

In the 1800's, this area was homesteaded and extensively farmed. Over time, folks started coming to enjoy the views and the cooler atmosphere in the summer. Cabins and lodges sprang up to accommodate the tourists and folks started promoting pursuits like hiking, picnicking, sightseeing, horseback riding, camping, birding and watching the wildlife. These days, you'll also find folks on the mountain climbing the rock formations, rappelling the cliffs, biking the trails and launching hang gliders from the top.

The US Forest Service built a lodge at the summit in 1940 and that lodge was packed in the summer months until it burned in 1971. 30 years later, Arkansas State Parks took on the building of a new, 60-room lodge and it opened to the public in May, 2006. Along with the lodge are 13 park cabins for rent.

The campground at Mount Magazine State Park was taken over and refurbed by Arkansas State Parks in the summer of 2001, adding full water, electric and sewer hook-ups to the 18 existing sites. The campground also offers a barrier-free bathhouse with hot showers and flush toilets. There are 2 campsites with 50 amp service, water and sewer. The other 16 sites offer 30 amp service, water and sewer. One site (#7) is universally accessible. There is an RV dump station near the campground, too.

If the State Park campground is full, there are a couple of overflow areas nearby (at the Brown Spring Picnic Area and at Mount Magazine Horse Camp) but most folks head for the USFS campsites at Cove Lake, 10 miles north of Mount Magazine along the Mount Magazine Scenic Byway. At Cove Lake there are 28 RV/tent sites but none have hook-ups. The restrooms are vault toilets but there is running water and hot showers in season.

Mount Magazine also offers a site for hang gliders to launch from the summit of the mountain. 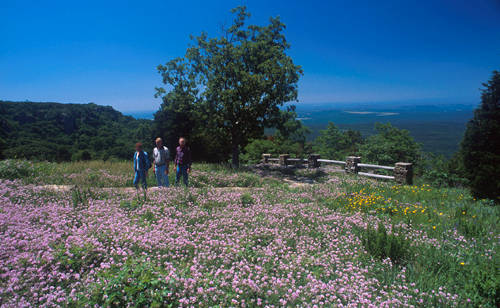