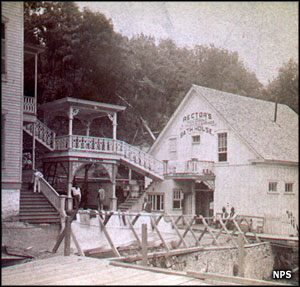 The Rector Bathhouse in the 1870's

Native Americans were frequenting this area thousands of years ago, often coming to quarry novaculite to make weapons and tools with. Thomas Jefferson sent the Dunbar-Hunter Expedition to explore the lower reaches of the Louisiana Purchase in 1804 and they stumbled across the hot springs. By 1832, the area had become the Hot Springs Reservation (essentially becoming America's first "National Park") and businesses catering to the health needs of the American public began to spring up. A town formed and business was booming until the Civil War came along. In May, 1862, then-Arkansas Governor Henry Massie Rector moved the state government to his bathhouse and hotel at Hot Springs Reservation. A couple months later, the state government moved their operations further south to Old Washington and stayed there for the remainder of the war.

Hot Springs (nor Arkansas, for that matter) wasn't the same after the war. Then the Federal government reclaimed Hot Springs Reservation and started rebuilding the area in 1878. The 1880's saw the Hot Springs area become the premier site for Major League Baseball spring training as the Cincinnati Reds, Boston Red Sox, Chicago White Stockings, Pittsburgh Pirates and others came to the area for the natural healing offered to tired and bruised muscles by the mineral springs. That lasted into the 1940's when teams began to be lured away to sites in Florida and Arizona.

The hot water is the result of surface water sinking about a mile into the ground and being heated by the natural processes of the Earth. As the water heats it compresses and when it descends to the depth of the fault along the western foot of Hot Springs Mountain, it then rises quickly through that fault to the surface and emerges at about 143°F (62°C). The hot spring water reservoir collects about 700,000 gallons of hot water every day. Scientists have estimated that the water emerging from the hot springs today fell on the ground as rainwater about the same time the pyramids in Egypt were being built (about 4400 years ago).

The park visitor center is at the historic Fordyce Bathhouse (which is closed for renovation until sometime around September 2013). But the park offers numerous historic buildings, natural areas and cultural landscapes. The Bath Promenade in the Bathhouse Row National Historic Landmark District offers eight historical bathhouses to explore. The park grounds contain some 26 miles of hiking trails and there are several scenic mountain roads to tour. Some of those trails were laid out in the 1890's but many were built during the 1920's and completed by CCC workers in 1933. The park itself encompasses some 5,500 acres of parkland and mountainside forested areas.

The hot springs are the primary natural resource of the park and have been managed to conserve the production of uncontaminated hot water for public use. The mountainous countryside the park is embedded in has also been managed with that same conservation philosophy as those mountains contain the hydrological system that feeds the springs. The surface areas of the park preserve vegetation, wildlife, cold and hot water springs, foot trails, historic and prehistoric novaculite quarries and multiple associated cultural and historic features.

Outside the Bathhouse Row National Historic Landmark District, the park is primarily forested hills and valleys covered with a mix of oak, pine and hickory intermixed with multiple other species of evergreen and deciduous shrubs and trees. The spring display of blooming trees and wildflowers is especially beautiful. Because of the many species of deciduous trees and shrubs, the fall colors are also vivid and beautiful.

The park and the Gulpha Gorge Campground are open year round. The Visitor Center is open 9 am to 5 pm daily except New Year's Day, Thanksgiving Day and Christmas Day. Sometimes there are extended hours in the summer, depending on the level of funding available...

There is no entrance fee to the park. Primitive campsites (no hookups) run $10 per night with a stay limit of 14 days. Full hookups (30 & 50 amp electric, water and sewer) run $24 per night, 14 day stay limit. Possession of a Golden Age Senior or Golden Access Interagency Access Pass cuts those fees in half. Fees are subject to change. The campground accepts no reservations. 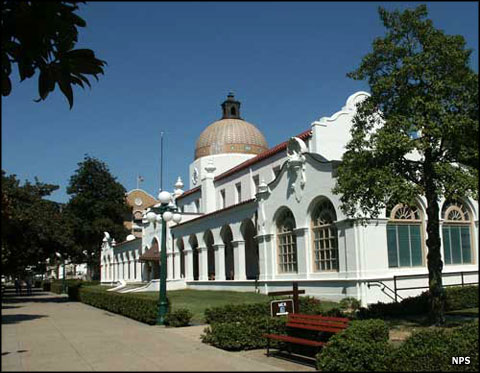 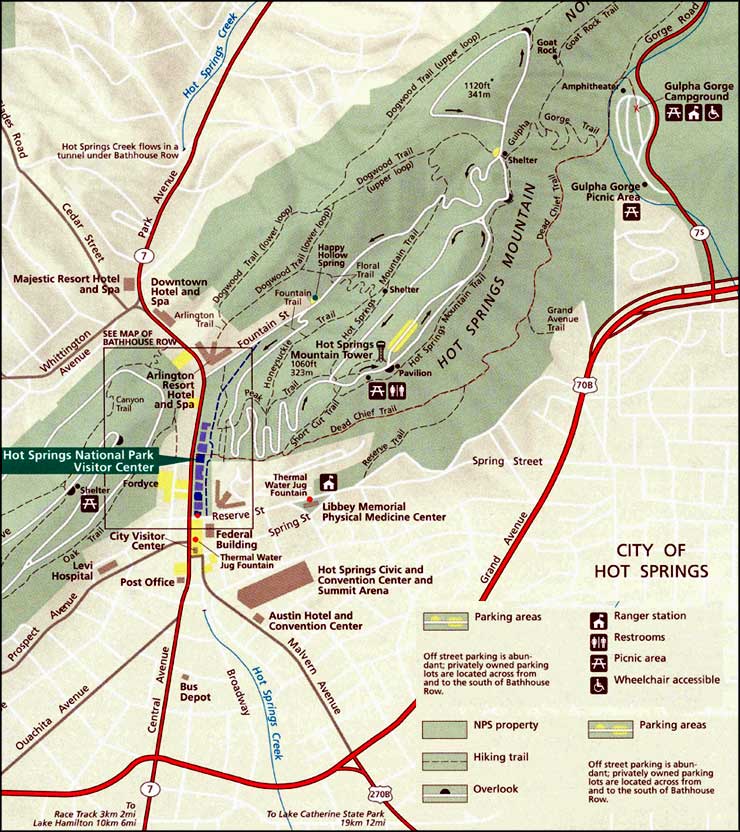