Felsenthal National Wildlife Refuge is a 64,902-acre property in southern Arkansas. It was the damming to create Lake Jack Lee that created the regularly flooded bottomland hardwood forest that makes up a significant part of Felsenthal NWR. The dam was built at the confluence of the Ouachita and Saline Rivers, an area historically composed of lakes, sloughs, streams and creeks. The refuge also has considerable acreage of pines and upland hardwood forest.

There was a time (beginning about 5,000 years ago) when the area of Felsenthal NWR was inhabited by the Caddo tribe of Native Americans. On the refuge are at least 200 archaeological sites, the remains of villages, towns and ceremonial structures left behind. Among the artifacts: temple mounds, ceremonial plazas, seasonal fishing camps and large villages with as many as 200 structures in them.

Felsenthal National Wildlife Refuge is the winter home of thousands of migratory waterfowl. The refuge also has a sizable population of wild turkey and of white-tailed deer. Hunting and fishing are allowed under Federal, state and refuge regulations (and Felsenthal has a lot of refuge specific regulations). In the heart of the refuge is a clearly marked waterfowl sanctuary. The sanctuary tends to be closed to humans most of the year. The refuge promotes hiking, wildlife photography and bird watching but reserves camping privileges for those who have the necessary permits and are actively engaged in a wildlife-dependent activity (like fishing or hunting). The camping is primitive and allowed only in obviously designated places (there's 11 of them, just look for the orange paint). There are also two commercial camping areas (with full facilities and hookups) adjacent to the refuge at Grand Marais Campground in the town of Felsenthal and at Crossett Harbor RV park on Highway 82. There are several boat launches on the refuge but don't launch any boat before 4 am. Most hunting is over by noon and all hunting equipment (blinds, etc.) must be taken down and removed by 1:30 pm the same day.

The Felsenthal National Wildlife Refuge office and visitor center is open Mondays through Fridays from 7 am to 3:30 pm except closed on Federal holidays. Hunting is by quota permit only, applications are available online. Sometimes same-day quota permits are available at the office.

In the cypress swamp at Felsenthal NWR 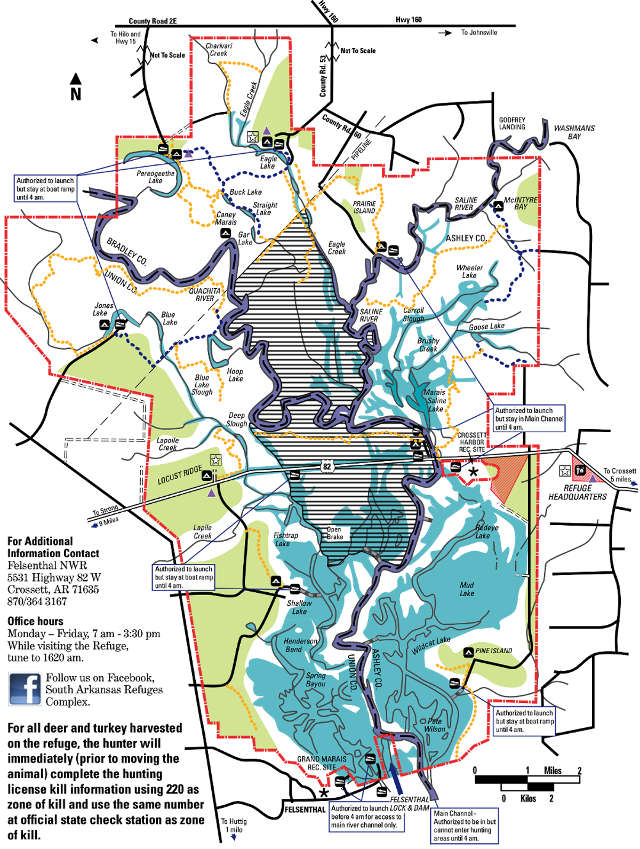