In the heart of the Mississippi River Valley flyway, Big Lake National Wildlife Refuge was established in 1915 to provide protected habitat for migrating and wintering birds. Since then, the mission has been expanded to include the protection of endangered species. Big Lake was especially important in the recovery of the bald eagle from endangered status: there have been new eagles born and raised on the property every year since 1993. Big Lake National Wildlife Refuge also offers a large expanse of bottomland hardwood forests in an area where that habitat has come into short supply due to increasing human pressure in the region. The 11,038-acre National Wildlife Refuge was originally established by President Woodrow Wilson in response to local concerns that agricultural development was destroying the natural environment of the area.

Big Lake was once part of a free-flowing river system but that was changed by the New Madrid earthquakes of 1811-12. Today, Big Lake is composed mostly of open water and wooded swamps. The lake itself is generally about three feet deep and is bordered by a virgin tupelo-cypress swamp mixed with buttonbush and black willow. Uplands on the property offer green ash, cottonwoods, hackberry, red maples, sycamores, river birch and a variety of oaks.

Big Lake NWR is essentially flat, about 240 feet above sea level and consists of about 8,138 acres of permanent water interspersed with wooded swampland. At times, 99 percent of the property may be submerged. Most of the open water is contained in the Little River drainage and Big Lake itself. The lake often has many small islands peeking out above the water surface, depending on season and water levels. A large proportion of that water surface is covered with pondweed, an excellent food source for waterfowl. 6,400 acres of Big Lake National Wildlife Refuge are designated as a National Natural Landmark with 2,100 acres of that also designated as Big Lake Wilderness (making this the smallest designated wilderness area in Arkansas). There are no developed trails on the property as most travel is done by boat. Technically there is a 3.1-mile Wildlife Drive on the property but that is usually restricted to refuge personnel these days and even they can't use it when water levels are high. Adjacent to the property is another 3,166 acres of land known as the Hornersville Swamp Conservation Area, owned and managed by the Missouri Department of Conservation for the preservation and protection of native wildlife.

Management of Big Lake National Wildlife Refuge is focused on protecting, restoring and enhancing the characteristics of the tupelo-cypress swamp and the bottomland hardwood forest that the birds and wildlife find so attractive. Water flows into the property via a series of ditches that drain about 2,500 square miles of the Missouri bootheel area. When possible, lake waters are manipulated to provide habitat for migratory waterfowl, marsh and shorebirds. However, due to the wording of the Flood Control Act of 1935, refuge personnel sometimes have no control over water levels. That situation has been exacerbated by the growth of agricultural interest in the surrounding areas and that non-natural drainage often has adverse impacts on the National Wildlife Refuge. Management is also focused on preventing the spread of exotic, invasive species on the property.

In the winter, the numbers of several species of migratory waterfowl can exceed 200,000 birds. Wood ducks tend to be year-round residents and annually raise about 2,500 chicks in natural cavities and in nest boxes scattered around the property. More than 225 species of birds have been recorded as visiting or inhabiting the refuge. Other wildlife on the property include otters, raccoons, beavers, wild turkeys, bobcat, white-tailed deer and the occasional armadillo.

Big Lake National Wildlife Refuge is located in northeastern Arkansas, adjacent to the bootheel of Missouri. The headquarters is located on the north side of State Highway 18 about 35 miles east of Jonesboro and 15 miles west of Blytheville. The refuge is open year-round for day use only. Portions of the property may be closed at times due to flooding. There are no fees involved for visitors. 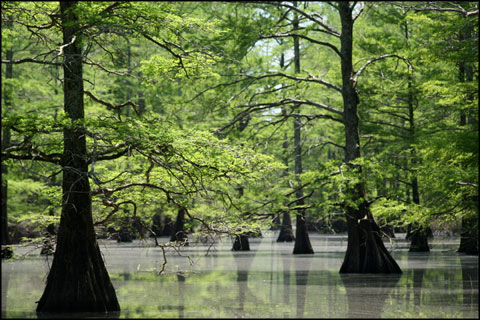 In the Big Lake Wilderness area