Tensaw Parkway runs in a north/south direction across the southern landscape of Alabama. This is an area that still shows the imprint of cultures from the Mississippians through the Spanish, French and British to modern America. This is a region of unique biodiversity, rich farmland and ubiquitous waterways on the northern edge of Mobile Bay and along the eastern perimeter of the Mobile-Tensaw River Delta.

The Parkway is a corridor along State Highways 225 & 59 from Mobile to the northern boundary of Baldwin County. The numerous boat launches along the route give plenty of easy access to the water with its abundant fresh and saltwater marine life. The Delta is more than 400 square miles in size and includes rivers, bottom land, marshes, swamps and timberland. The water flow here is rated the third largest river system in the United States with fifteen interior rivers sending all their drainage here. That has led to the growth of more than 500 species of plants and wildlife in the Delta area.

There are several one-day and overnight canoe trails marked through the creeks, sloughs and lakes. There is also the possibility of a two-hour river tour aboard the Delta Explorer (information is available through the office at Blakeley State Park). Blakeley State Park also offers small group camping, 31 secluded family-size campsites and several picnic areas.

About 4,000 years ago, the site of Blakeley State Park was the site of a thriving Native American village. By the time the French arrived, the area had been occupied by the Apalachee tribe. The Apalachees stayed well after the French left, then Josiah Blakeley came from Connecticut in 1814 and chartered the town of Blakeley. The town served as Baldwin County's first seat of government, until yellow fever and run-away land speculation destroyed the local economy... and the town with it. The same day General Robert E. Lee was in Appomatix, Virginia surrendering to General Ulysses S. Grant, another major battle was being fought between the Confederates and the Union at Blakeley. Today the State Park preserves miles of breastworks, old rifle pits, redoubts, old earthen forts and battery positions from that April 9, 1865 fight.

Also just off the Parkway is what remains of Fort Mims. In 1813 a group of settlers had hidden inside the fort but the fort was attacked and overrun by the Red Sticks Creeks and everyone inside was killed. Some historians estimate the Euro-American death toll at 500, which would make the Fort Mims massacre one of the most brutal in American history. It was after the Fort Mims attack that the Red Sticks were almost wiped out at what is now Horseshoe Bend National Military Park. Today, the Fort Mims site is the 5-acre Fort Mims State Historic Park. A few miles to the north is the gravesite of Red Sticks leader William Weatherford, the man who led the assault on Fort Mims.

The Alabama Coastal Birding Trail passes right through the Tensaw Parkway corridor and accesses several bird sanctuaries along the eastern edge of the Mobile-Tensaw Delta. 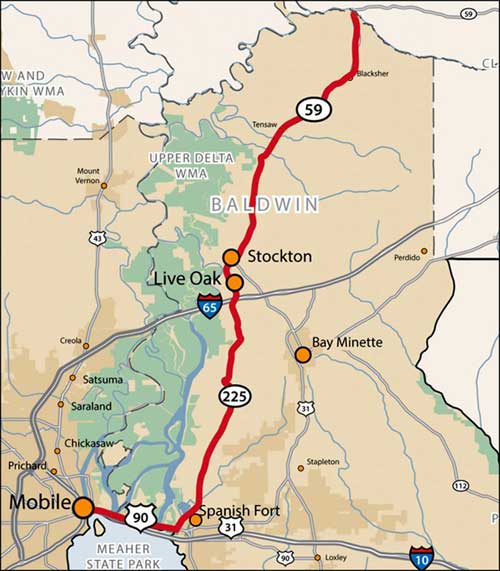