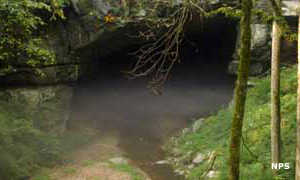 An entrance to Russell Cave

Archaeological evidence found at Russell Cave National Monument indicates that the cave has been used by humans for most of the last 10,000 years. Archaeologists have found the most complete record of prehistoric cultures in the southeastern states here. The most likely reason for the long history of human use: the cave interior maintains a steady temperature of 58°F. It's always cool in the summer, always warm in the winter. A natural spring flows into the cave before sinking into the ground and traveling underground for 1.5 miles to empty into Widow's Creek.

In the early days, the floor of the cave was just above water level but a large roof fall raised one side enough to make it habitable (except in times of flood). Floods slowly washed more and more dirt into the cave, then humans started doing their thing until today, the floor in that part of the cave has been raised about forty feet above the water surface. Archaeologists have dug into that dirt pile and found artifacts in layers stretching from about 1650 CE back to about 6500 BCE. In terms of the general cultures involved the sequence is Paleo, Archaic, Woodland, Mississippian (oldest to newest). The oldest artifacts found at Russell Cave date back to the period when Paleo was making the transition into Archaic. Paleo cultures were almost purely hunters while the Archaic prototypes were moving into hunter-gatherers, making use of a wider range of the available natural resources.

The first Native Americans to discover the cave probably did so about 11,000 years ago, well before the roof of the cave fell and raised enough floor space for humans to take up any kind of semi-permanent residence. But that one instance of roof collapse made the cave almost permanently inhabitable and it was tailor-made for those early peoples. For most of the time since then, there were probably between 15 and 30 people at a time living in the shelter, mostly members of a tribe or an extended family. The numbers were limited by the ability of the local resources to sustain a population of humans. There is evidence that at times, many users were simply nomads passing through while at other times, the same family might be in place for several generations. Evidence also indicates that for the last thousand years or so before the arrival of Europeans, the shelter served mainly as a hunting camp.

Spears and arrow-points found indicate the relative cultures of the various people that occupied the site over time. Twenty-four burials have been found in the cave, ranging from infants to one woman who lived to be almost 50. The earliest samples of pottery found date from a bit more than 2,000 years ago. After that came the bow and arrow, then more sophisticated tools and weapons. Evidence also shows a growing system of trade with other cultures across hundreds of miles of countryside. 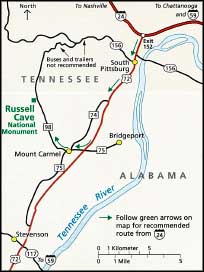 The initial excavation of the property took place in 1953. The Tennessee Archaeological Society dug about six feet into the floor materials and found a large number of pottery fragments, bone tools and jewelry. Financed by the National Geographic Society, the Smithsonian Institution poked around some more from 1956 to 1958, eventually digging down some 32 feet. The last excavation was carried out by the National Park Service in 1962. They finally reached the solid rock at the bottom of the dirt pile and used many of the artifacts they found in the on-site exhibits. Carbon-14 dating was used to date the charcoal remains in the fire pits found and those dates were used to date other artifacts found in the same layers of dirt and debris.

The National Geographic Society bought the 310 acres of land around the cave opening in the early 1950's and donated it to the National Park Service. John F. Kennedy signed the documentation that made Russell Cave a National Monument in 1961. The name comes from Thomas Russell and family. They were the owners of record when maps of the area were first made around 1835.