Western Trails Scenic and Historic Byway is a 144-mile route following US Highway 26 and Nebraska Highway 92, following in the path of the great Emigrant Trails of the 1800's: the California, Oregon and Mormon Pioneer National Historic Trails. The eastern end of the route is in the town of Ogallala, once called "the Gomorrah of the Plains" due to it being the railhead at the end of many cattle drives. As such, many rowdy cowboys got paid here and partied it up before heading back to the cattle ranches and preparing for next year's cattle drive.

The western end of the scenic byway is at the Wyoming State Line, just west of Henry (where the route meets up with the beginning of Wyoming's Oregon Trail Historic Byway). In between is the relatively verdant valley of the North Platte River, surrounded by increasingly higher and drier countryside as you go west.

Coming out of Ogallala, the byway encircles Lake McConaughy, a modern creation which offers plenty of fishing, boating and other water sports at several different State Recreation Areas. The route comes together as one byway again near the site of Ash Hollow State Historic Park. At Ash Hollow you'll find some of the wagon wheel ruts left behind by travelers on the great Emigrant Trails. You'll also find the remains of many prehistoric mammals that died here during a massive ash fall after a volcano in Idaho exploded some 10 million years ago.

Near what is now Bridgeport you'll come to the famous Courthouse and Jailhouse Rocks, major markers alongside the old wagon trails. A bit further on you'll come to Chimney Rock National Historic Site with its famous spire that, for many, marked the end of the Great Plains and the beginning of the Rocky Mountains. The next big landmark along the route is Scotts Bluff National Monument.

To the north of the byway you'll find the Crescent Lake National Wildlife Refuge and North Platte National Wildlife Refuge. To the south (down the Gold Rush Byway from Bridgeport) is the Wildcat Hills State Recreation Area, an area of high bluffs and pine-covered countryside that offers several miles of hiking trails and several observation points that look out over the North Platte River Valley. 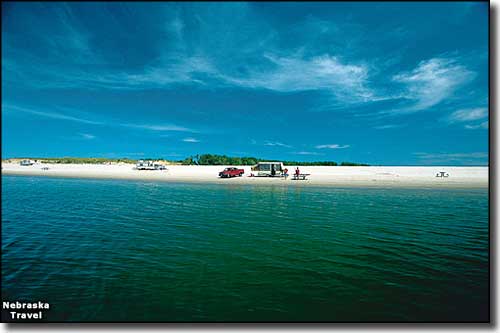 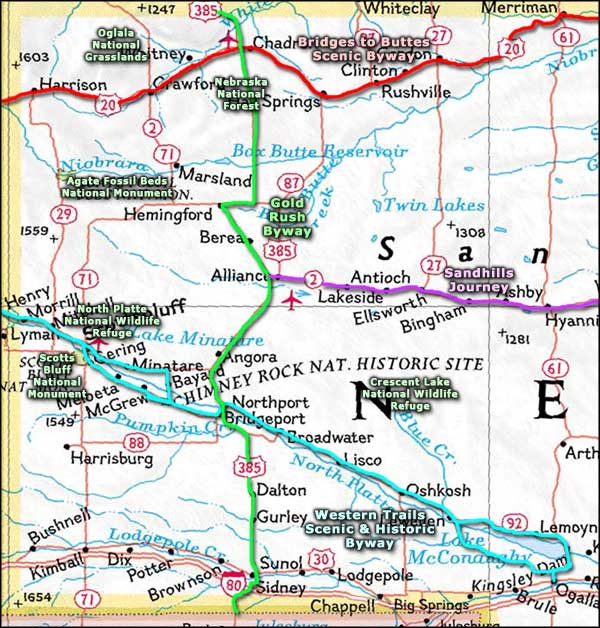