The Oregon Trail-Bear Lake Scenic Byway is a 111-mile route through southeastern Idaho. The southern third of the route is along the western side of Bear Lake. At Montpelier, the route meets up with the main trunk of the old Oregon Trail and roughly parallels that to the area of Soda Springs. At Soda Springs, the route of the byway curves to the west and roughly parallels the route of the old California Trail until it reaches the intersection with Interstate 15 and ends.

Between the Utah-Idaho state line and Montpelier, the Oregon Trail-Bear Lake Scenic Byway passes through several historic settlements begun by Mormon pioneers in the 1860's and 1870's. Until the general survey was completed in 1872, those early settlers believed they were still in Utah but that survey demonstrated they weren't. However, that didn't stop those hardy early pioneers from building their homes, establishing their farms, growing their families, digging their irrigation canals and building some incredible structures. One of those structures is the Romanesque Revival-style Tabernacle in Paris, built between 1884 and 1889 out of red sandstone.

From the state line, the route passes north along the western shores of Bear Lake. Back in early mountain man days, the Bear Lake area was the scene of several rendezvous (gatherings of mountain men, fur trappers, Indians and peddlers and traders out of St. Louis). Today, there is a Utah state park with several units on the southern shore and an Idaho state park with a unit along the eastern shore and another along the northern sandy beach. North of that is about 18,000 acres of Bear Lake National Wildlife Refuge, covering most of what used to be known as the Dingle Marsh.

The second town north of the state line is St. Charles (the first town being a small settlement named Fish Haven). St. Charles is most famous for being the birthplace of Gutzon Borglum. Gutzon Borglum was a prolific American sculptor who is probably most known for "carving" the sculptures of the American presidents at Mount Rushmore in South Dakota. He also carved a marble sculpture of Abraham Lincoln's head that is now on display in the Capitol's rotunda. You'll find two stone monuments in St. Charles commemorating Borglum. 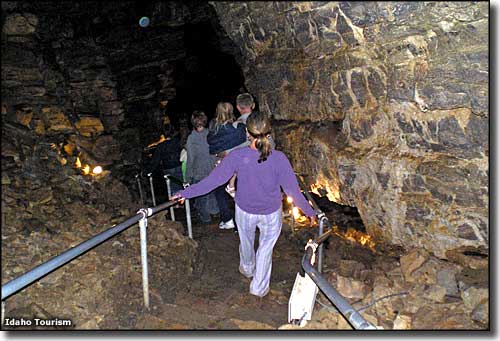 Back on the main road (US Highway 89), you'll pass through Paris and Ovid before coming to Montpelier. Montpelier was settled by Mormon pioneers who originated from the area of Montpelier, Vermont (hence the name). Montpelier is the "big city" in this part of Idaho and near the main road junction in the middle of town is where you'll find the National Oregon/California Trail Interpretive Center. This is a visitor center/museum with "Living History" displays that is located directly on the old Clover Creek Encampment Site. Just northwest of Montpelier is the site of "Big Hill," probably the steepest stretch of the old Oregon Trail. The photo below shows the hillside in winter, when you can still see the ruts made by wagons being pulled up the hill with their wheel brakes locked (photo courtesy of Jim Parker).

From Montpelier, the route of the Oregon Trail-Bear Lake Scenic Byway parallels Bear River and the old wagon ruts to Soda Springs. Near Soda Springs is Sheep Rock, site of the main divergence between the Oregon and California Trails. In the Soda Springs area are several natural mineral springs (some sulphurous, some not) and the famous "Captive Geyser." In 1937, a local well driller was drilling for water to fill the town's swimming pool when he hit the pressurized water at a depth of 317 feet that is now the famous geyser.

Today's route passes through Soda Springs, then continues to follow US Highway 30 west to the turnoff to Bancroft. There, the byway heads northwest off the main road and visits a couple more of the old settlements before returning to US Highway 30 at Lava Hot Springs.

Lava Hot Springs is very aptly named: the site of a large outflowing of geothermal water that has become a major spa/resort destination since it was first noticed by travelers more than 150 years ago. The Portneuf River flows nearby and that river has become a favorite among the tubers and whitewater rafting set.

From Lava Hot Springs, the Oregon Trail-Bear Lake Scenic Byway continues west on US Highway 30 to McCammon and ends at the ramps for Interstate 15. 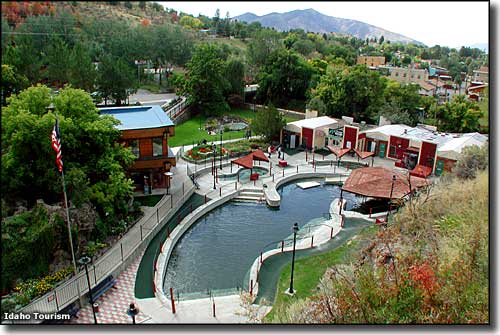