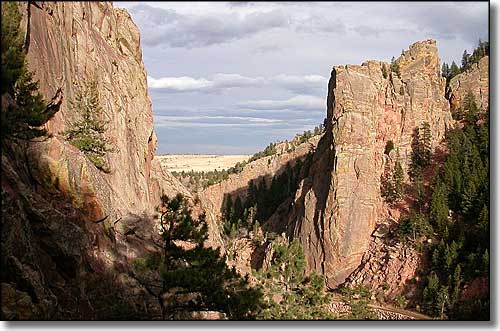 Redgarden Wall on the left, The Bastille on the right
Near the entrance to Eldorado Canyon State Park

Located just outside Boulder on South Boulder Creek, Eldorado Canyon State Park is one of those places known world-wide for its rock climbing opportunities: there are more than 500 established technical rock climbing routes inching their ways up these beautiful, sheer, golden sandstone cliffs. As enticing as those rock walls are, there are also some 11 miles of hiking and mountain biking trails here, many of which connect directly with the trails of the City of Boulder system. There are several good picnic spots and the fishing in South Boulder Creek is excellent. In winter this is a favorite spot for snowshoeing and cross-country skiing. From May to September, Eldorado Canyon State Park sees full capacity crowds on weekends and holidays, so: fair warning!

A town named Eldorado Springs was established near the entrance to Eldorado Canyon around 1900. The town was primarily a resort for the elite and in addition to warm artesian springs, visitors were offered lush hotels with names like the Eldorado, the Grand View and the Crags Hotel. Many well-to-do Denver residents and other celebrities enjoyed the environs until a fire in 1912 wiped out everything. There was also a fellow named Ivy Baldwin who, between 1906 and 1949, regularly performed tight rope acts on a line stretched across the canyon 580' in the air.