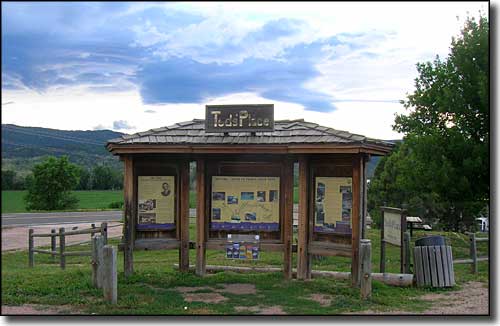 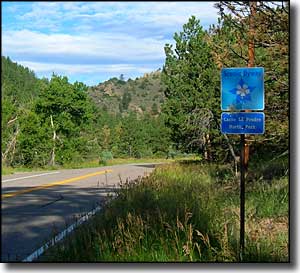 The Cache la Poudre-North Park Scenic Byway crosses the Continental Divide, linking Fort Collins with Walden in North Park. The road follows the Cache la Poudre River Canyon: once a transit corridor for Native Americans, then for European explorers and trappers, now for hunters, fishermen, leaf-watchers and other lovers of the great wild outdoors.

The Cache la Poudre River is Colorado's only National Wild and Scenic River and, in season, tends to be swamped with rafters and fishermen. Cameron Pass (10,276 feet) on the Continental Divide is the eastern gateway to the Colorado State Forest State Park, a 70,000 acre preserve of large evergreen thickets among heavily glaciated mountains. North Park is a grass-filled, bowl-shaped valley full of deer, pronghorns, elk, moose, beaver, coyote, and waterfowl, all flocking to the highway that leads to North Park to hang out with the ever-growing hordes of people trying to escape the cities...

You'll find most traffic on the Cache la Poudre-North Park Scenic Byway during the fall when the leaves are changing and big game hunting season is on. Fall colors tend to peak around the third week of September but colors up high start changing earlier. Between aspen, cottonwood and gambel oak, there's usually a full spectrum of color available in season. Spring sees the river flowing high with snowmelt, then summer rolls in on an incredible carpet of wildflowers... There are several picnic areas along the way, the fishing is excellent and the Arapaho-Roosevelt National Forest offers camping, hiking and wilderness just beyond the edge of the pavement.

Cache la Poudre-North Park Scenic Byway crosses the mountainous region of north-central Colorado with the Medicine Bow and Laramie Mountains to the north and the Mummy Range and Never Summer Mountains to the south. From the Byway you can get access to the Cache la Poudre, Neota, Rawah, Never Summer, and Comanche Peak Wilderness Areas. Just beyond the western boundary of the Colorado State Forest is Arapaho National Wildlife Refuge. The 26 lakes in the region are usually well stocked with brook, cutthroat and rainbow trout. And in winter, many of the Forest Service roads become cross-country skiing and snowmobile routes.

I drove the road in late July and had nearly the entire distance to myself. I started out early in the morning and made it to Walden by mid-afternoon. What took so long: lots of stops in places like The Narrows, Cameron Pass, State Forest State Park and Arapaho National Wildlife Refuge with detours to hike around a bit in Cache la Poudre, Comanche Peak and Rawah Wilderness Areas. 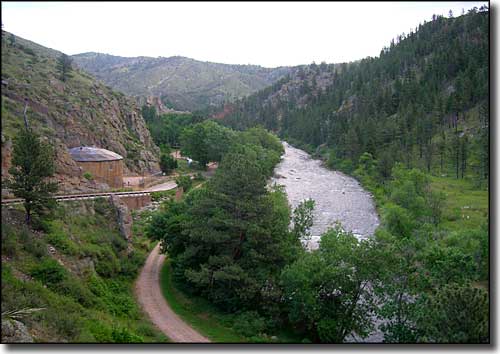 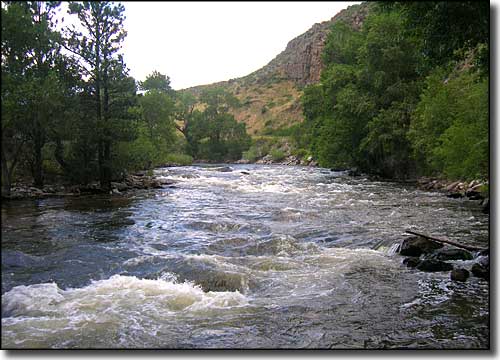 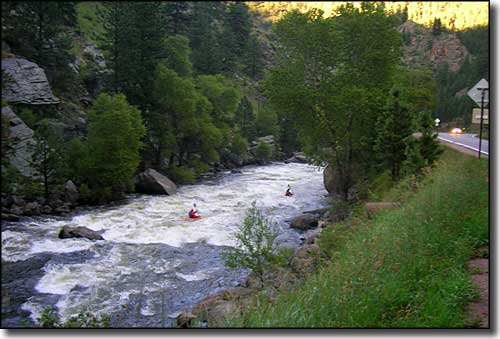 Kayakers on the Cache la Poudre 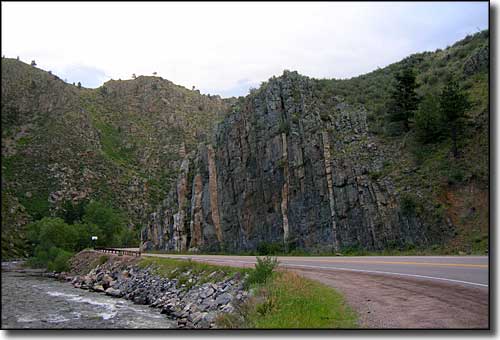 Notice the striations in the tilted granite 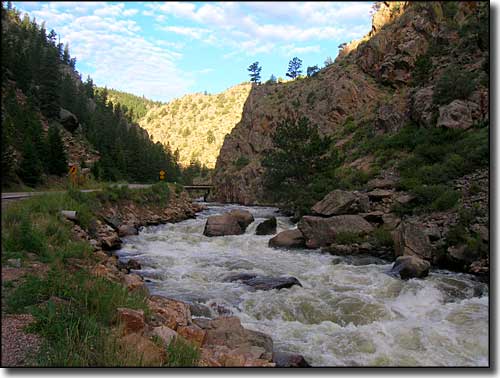 Some serious whitewater in the river 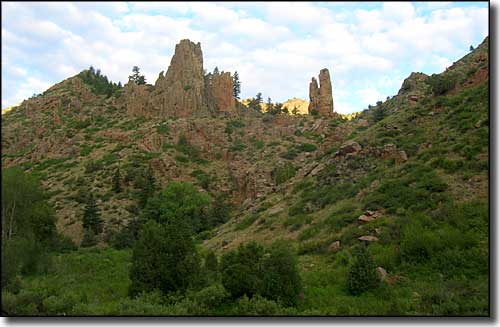 Pillars of rock rise above the road 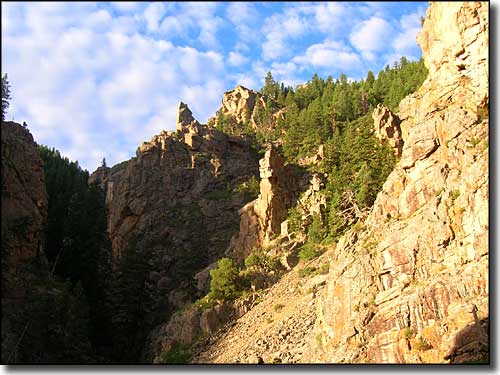 At the edge of Cache la Poudre Wilderness 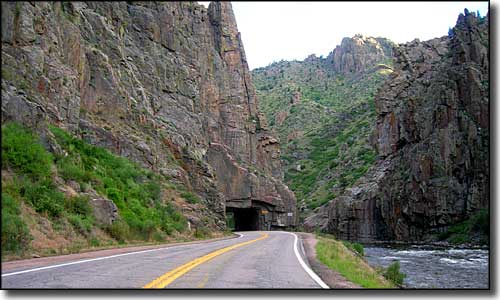 Coming to The Narrows 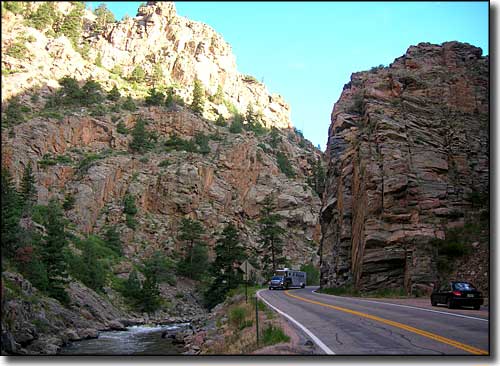 Deep in The Narrows 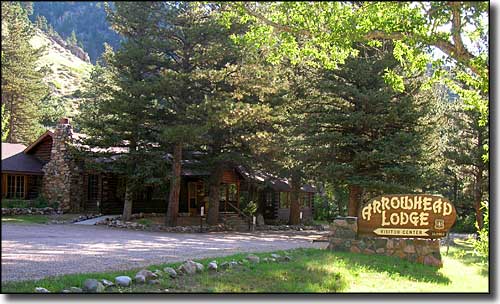 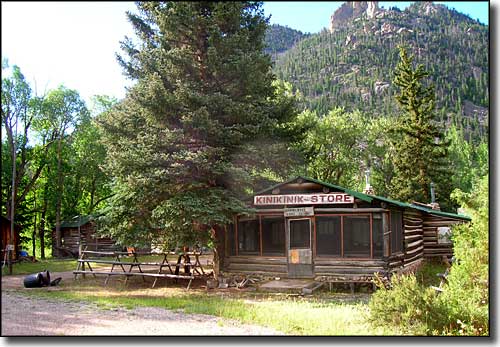 That spot on the map named "Kinikinik" 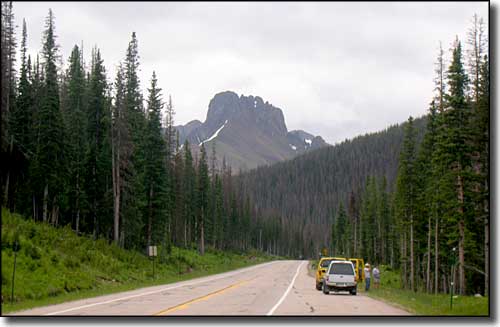 The Nokhu Crags above Cameron Pass 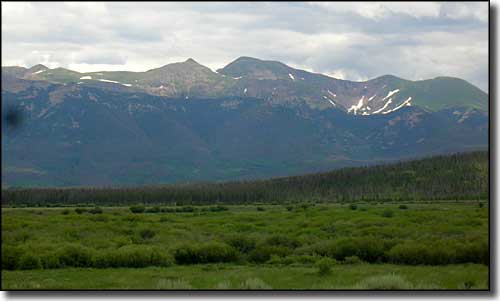