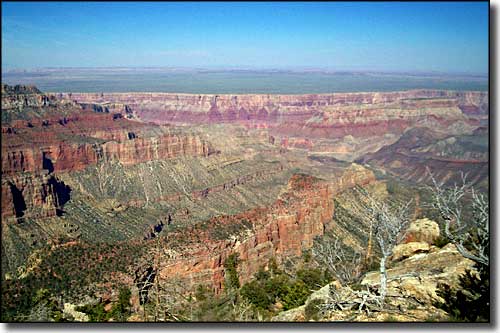 The Kaibab Plateau-North Rim Parkway is also known as Arizona State Road 67. The route is 42 miles long, running from Jacob Lake (US Highway 89A, also known as the Fredonia-Vermilion Cliffs Scenic Road) south to the North Rim of the Grand Canyon. The final 12 miles are within Grand Canyon National Park. The road rises for the first 15 miles through the Ponderosa pine forest into the alpine coverage of Engelmann spruce and subalpine fir as you travel south from Jacob Lake to almost 9,000' in elevation. Then it levels out and descends slowly as it crosses De Motte Park, a vast wildflower-strewn alpine meadow. Depending on how much snow fell during the preceding winter (and often that total exceeds 200 inches), De Motte Park may be a vast wetland with meandering streams and ephemeral marshes. The grasslands extend southward to the entrance to the National Park. Once through the gate, the road starts to drop as it twists and turns through shallow ravines between small stands of quaking aspen until finally you realize you're on a large promontory poking out into the vastness of the Grand Canyon itself. Then the road terminates in the parking lot at the North Rim Lodge. Because the National Park Service and National Forest Service don't plow the snow, the route is usually closed from mid-November through mid-May.

There are side roads along the route that head into Kaibab National Forest, a couple of them giving access to Saddle Mountain Wilderness and the Nankoweap Rim. Once you're inside the park, there's another side road that leads out onto Walhalla Plateau and to Point Imperial. 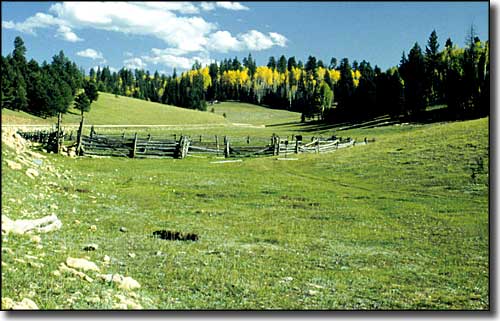