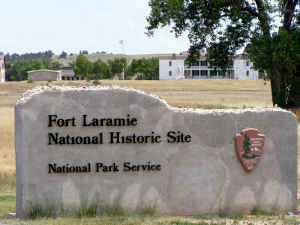 Fort Laramie National Historic Site is an 833-acre property established to protect and preserve the old Fort Laramie, originally a fur trapper's fort built in 1834 that was taken over by the US Army in 1849 to protect travelers on the Oregon, California and Mormon Trails. Many travelers on the emigrant trails stopped at Fort Laramie for several days to rest and restock their provisions before continuing on up the North Platte River. Northwest of Fort Laramie is Register Cliff, a long vertical wall where many emigrants left their names written in axle grease on the rock.

Fort Laramie was built on the lower Laramie River, near its confluence with the North Platte River. The location made Fort Laramie a good stopping place for folks traveling the old emigrant trails. Fort Bernard was built in 1845, about eight miles to the east along the North Platte and the proprietors there undersold the traders at Fort Laramie for years. But then Fort Bernard burned to the ground in 1866 and was never rebuilt.

The US Army bought Fort Laramie in 1849 and took up residence there for the next 40 or so years. The First Treaty of Fort Laramie was signed in 1851, leading to relatively peaceful relations between the Anglo-Americans and Native Americans through most of the decade. During the Civil War, tensions grew and the fort took on a more military posture.

In the late 1860's, Red Cloud's War was fought, with the Anglo-Americans soon suing for peace after losing every engagement of the war. The Second Treaty of Fort Laramie was signed in 1868 and that brought another seven years of relative peace to the area. Then white miners trespassing on Lakota and Northern Cheyenne territory discovered gold in the Black Hills. That brought on the the Great Sioux War of 1876-1877. Fort Laramie never saw any local fighting but did serve as a major staging point for troops and supplies.

The completion of the Transcontinental Railroad in 1869 spelled the end for travel on the big emigrant trails. When the Indian Wars were finally over, Fort Laramie's days were numbered. The fort was finally decommissioned in 1890 and most of the buildings were sold to private citizens. The military reservation was six miles wide and nine miles long. It was opened for homesteaders to occupy in 1891. What remained of the original Fort Laramie became a designated National Monument in 1938 and a National Historic Site in 1960.

Among the historic artifacts to be found along this road is the Iron Bridge, built in 1875, the oldest existing military bridge west of the Mississippi River. The Iron Bridge crosses the North Platte River near Fort Laramie. General George Crook led his troops across the Iron Bridge in 1876 as they were leaving Fort Laramie and heading to meet up with General George Custer at the Little Bighorn in Montana. Crook got to Montana too late to be of any help to Custer and his men... The Iron Bridge was in daily use up until 1958 when it was finally replaced.

On visiting Fort Laramie National Historic Site today, what you'll see is a reconstructed version of the central area of the old fort. The park grounds are open every day of the year from sunrise to sunset. The fort museum and visitor center is open daily from 8 am to 5 pm except for Thanksgiving Day, Christmas Day and New Year's Day. There are extended hours in the summer months. 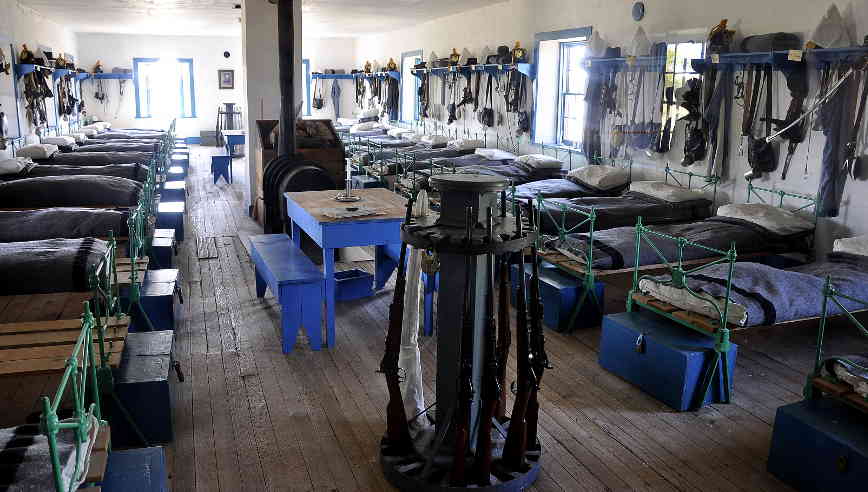 Register Cliff, northwest of Fort Laramie on the Oregon Trail 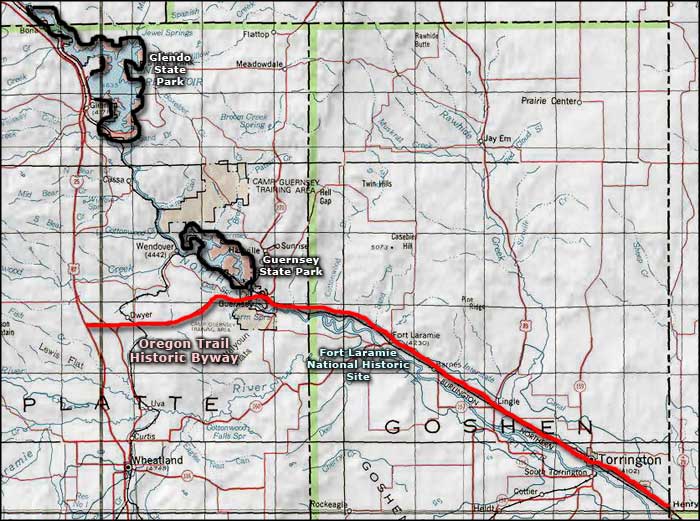