"Free Spirits at Noisy Water" along the Billy the Kid Trail 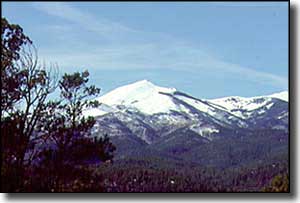 The Billy the Kid Trail is an 84-mile scenic drive through Lincoln County, New Mexico. This area is most famous as being the home of the Lincoln County War, a war fought between two mercantile operations and their hired gunmen in the 1880's. The fighting was over who would get the lucrative contract to sell meat and other supplies to the Army garrison at nearby Fort Stanton. What made the whole thing historic was the presence of Billy the Kid and Sheriff Pat Garrett. But that wasn't the only item of interest to happen over the years in this area.

The Billy the Kid Trail is almost completely surrounded by the million acres of Lincoln National Forest. It was in the Capitan Mountains of Lincoln National Forest that fire-fighters rescued a small black bear cub with singed feet in the 1950's. That cub grew up to become Smokey Bear, international forest-fire-fighting icon. When Smokey Bear died, he was returned to Capitan and is now buried in the back yard of Smokey Bear Historical Park.

In Ruidoso Downs you'll find the Hubbard Museum of the American West, a site that does more homage to the horse than to most other aspects of the historical American frontier. If you're in the area, you'll want to stop and spend some time with Dave McGary's incredible "Free Spirits at Noisy Water" sculpture out in the yard.

Billy the Kid Trail loops around the Fort Stanton-Snowy River Cave National Conservation Area, an area where you'll find some excellent opportunities for camping, hiking, horseback riding and exploring in the 12 caves that are known to exist on the property. The Fort Stanton Cave has already been mapped for eleven miles underground. The Snowy River Cave has been mapped for five miles. The caves are open to the public from April through November but you'll want equipment and some extensive caving experience before you head down. Historically, Fort Stanton was commanded by such personages as Kit Carson and General "Black Jack" Pershing. Even Billy the Kid spent some time there.

Billy the Kid Trail also offers access to the golf links at Sierra Blanca and to the ski slopes at Ski Apache. Also along the route is the Lincoln State Monument, a place that time has apparently forgotten. At Lincoln you can stroll through the town as it was in the 1880's when one of the West's last great shootouts was happening. It was from the county courthouse in Lincoln that Billy the Kid escaped on April 25, 1881 and killed two deputies as he left town. Sheriff Pat Garrett finally caught up to him and killed him in the middle of the night at Fort Sumner three months later. It's at Fort Sumner that you'll find Billy's grave. 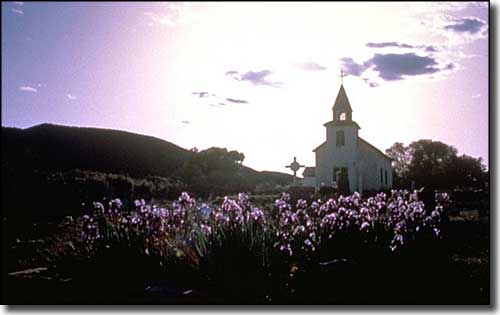 A church on a hill above the Billy the Kid Trail in Lincoln County, New Mexico 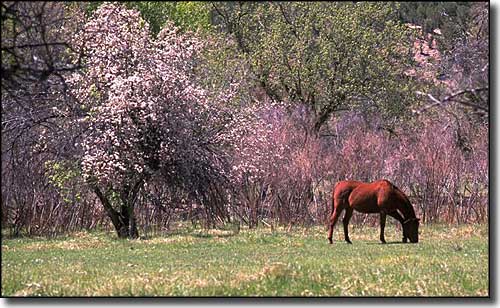 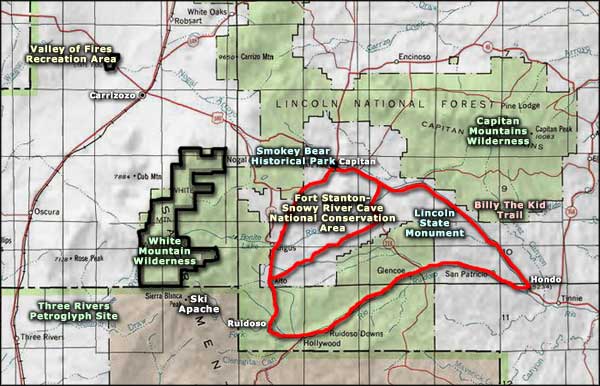