The 272 miles of the Sandhills Journey Scenic Byway follow Nebraska Highway 2 the entire way. This is a route across a nearly 20,000 square mile Wonder of Nature: the Sandhills District of Nebraska. The sand was blown here millenia ago, after the Inland Cretaceous Sea that covered most of Colorado and Wyoming dried up back in the days of Allosaurus and T Rex. The sand was buried for many years, only to be exposed again after the glaciers retreated northward at the end of the last Ice Age (about 10,000 years ago). Since then, grasses have filled in the open spaces and now we have this huge, wide open countryside of grass-stabilized sand dunes sitting atop the Ogalala Aquifer. The Ogalala is very close to the surface, close enough that in many areas it appears on the surface in the form of ponds and shallow lakes that feed into rivers that often meander all over the countryside. All that shallow water also appeals to millions of waterfowl and other birds in the spring and fall migration seasons. Upwards of 500,000 sandhill cranes descend on the area during every migration. Best place to see the birds: Crescent Lake National Wildlife Refuge, south from Lakeside.

When Euro-American homesteaders arrived in the area in the early 1860's, they found vast plains covered with protein-rich native grasses. Many thought it was paradise and filed homestead claims, built dirt houses and tried to plow fields. However, the loose sandy soil didn't plow well and refused to grow non-native crops. At that point, many abandoned the homesteads and headed for more fertile countryside. Over the years, cattle ranching operations grew... and grew... and grew, until now, this is some of the most productive cattle-raising property on Earth.

The Sandhills Journey Scenic Byway is anchored at its eastern end by Grand Island, a city in the verdant Platte River corridor. At its western end is the old railroad town of Alliance, right at that point where the mostly-grassy sandhills give way to fertile farmland and more tree cover. You'll find the Bessey Ranger District of Nebraska National Forest right around the midpoint of the scenic byway. Charles E. Bessey was a visionary, and part of what he envisioned was the Sandhills covered with a forest of Ponderosa pine. To that end, he founded the Charles E. Bessey Tree Nursery in the early 1900's and the nursery is still functioning, still turning out 2.5 to 3 million seedlings per year. That is what has made the Bessey Ranger District the largest hand-planted forest in North America.

A lot of the old values have remained among the families that are now four and five generations on their respective ranches. Folks are hardy, friendly and consider themselves stewards of this fragile ecosystem. That's a good thing in an area where biologists have recorded 314 species of animals and 720 species of plants... And to think that thousands of people still consider this countryside to be empty high plains desert... Take a drive here, you'll know the difference immediately. 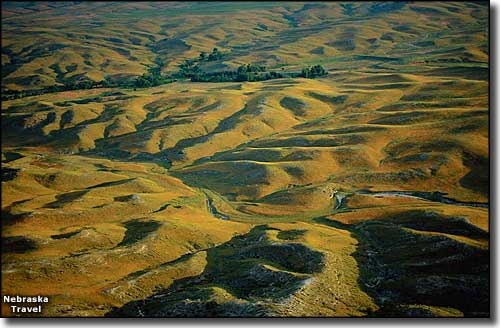 Aerial view of the Sandhills District 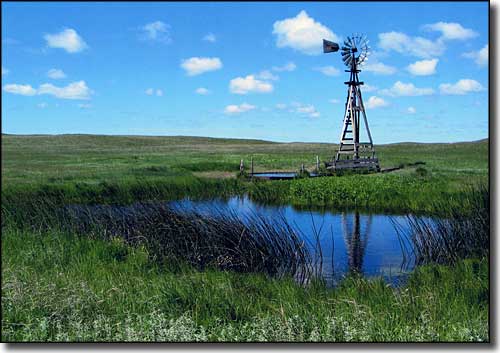