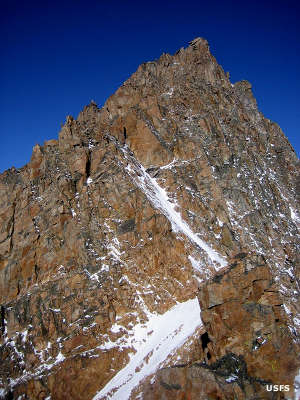 The East Ridge of Granite Peak

Custer National Forest is located mainly in Montana but there are separate sections that dangle over the state line into South Dakota. The 1,278,279 acres are broken into 11 different sections, the westernmost sections being part of the Greater Yellowstone Ecosystem and most of the rest being "forest islands" surrounded by grasslands. The eastern sections of Custer National Forest have few rivers and lakes and land management emphasizes working essentially hand-in-hand with ranching and logging interests. The western parts of Custer National Forest tend to be higher in both elevation and precipitation. 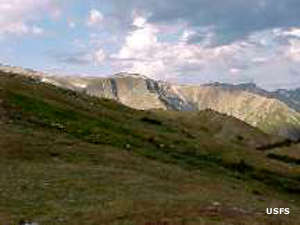 The Beartooth Ranger District is one of the gateways to the Greater Yellowstone Ecosystem. This is the home of the Beartooth Highway, a winding and very scenic route that peaks at 10,947' as it crosses the Beartooth Mountains and gives travelers access to the northeastern corner of Yellowstone National Park. This area is popular among the hunting set for its deer, elk and bighorn sheep. This is also a very popular area among fishermen. Just outside the town of Red Lodge is the Red Lodge Mountain Ski Resort, offering some excellent downhill skiing in season. Also close by is the Red Lodge Nordic Ski Center, offering about 12 miles of great cross-country skiing on groomed and maintained trails (also in season). A separate unit of the Beartooth Ranger District lies in the Pryor Mountains, adjacent to the Bighorn Canyon National Recreation Area and the Crow Indian Reservation. The Pryor Mountains tend to be very steep with canyons cut deeply into the limestone substrate. There are many old mining roads and primitive hiking trails in the area but the area doesn't see much recreational use. This is also very close to the Pryor Mountain Wild Horse Territory (managed by the BLM and National Park Service).

The Sioux Ranger District straddles the state line between southeastern Montana and northwestern South Dakota. The Sioux Ranger District is composed of 8 separate islands of Ponderosa pine on hills and mesas rising above the surrounding prairie lands. You'll find excellent hunting for white-tailed deer, wild turkey, mule deer and pronghorn here. You'll also find Capitol Rock (a white limestone uplift that resembles the national capitol) and the Castles (another large white limestone uplift that resembles a medieval castle). Both of these areas are designated National Landmarks. 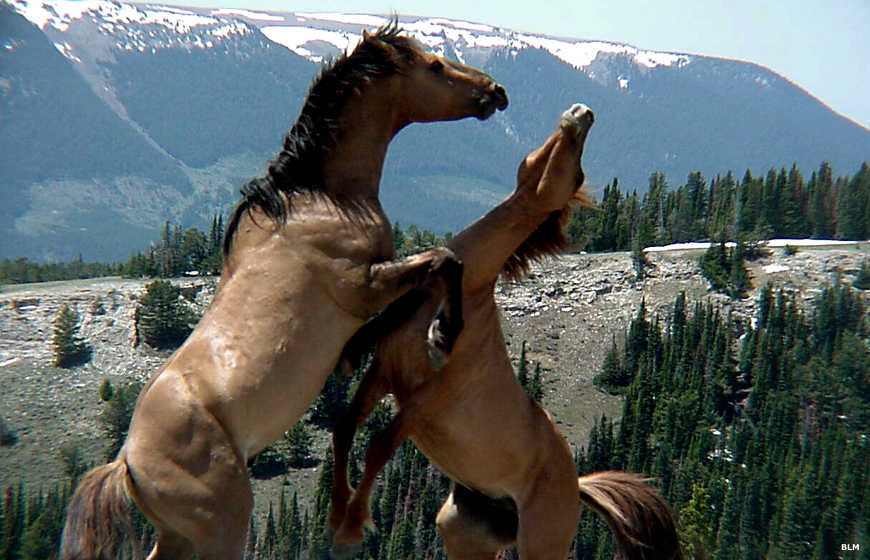