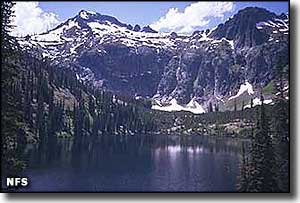 The Selway-Bitterroot Wilderness contains 1,340,502 acres, 1,089,059 acres of which are in Idaho. This is the third largest wilderness area in the lower 48 states. The Idaho section of Selway-Bitterroot is separated from the larger Frank Church-River of No Return Wilderness by a 600'-wide corridor along the Nez Perce Trail, an unimproved dirt road through the Magruder Corridor (actually what's left of the original Nez Perce Trail).

The Bitterroots are a heavily glacier-carved, steep and extremely rugged mountain chain that runs along the Idaho-Montana border. The peaks and ridge tops are barren, the slopes are more like vertical granite walls and the valley bottoms are heavily forested.

The Moose Creek Ranger District, 560,000 roadless acres, is entirely within the Selway-Bitterroot Wilderness. There's more than 700 miles of designated trails in the Moose Creek Ranger District alone, but almost none of those trails has seen any kind of maintenance in years. The best hiking is along the streams and rivers in the valley bottoms, but the undergrowth can be very heavy in spots. The best views are on top of the ridges and the raw granite peaks, but getting there may take some serious technical rock climbing experience. There is water everywhere in the lower areas. I hear the fishing is among the finest on Earth.

The higher reaches of the Selway-Bitterroot Wilderness see snowfall from September into June, but just because it's July doesn't mean you don't want a good down sleeping bag, even in the bottom of the valley. To make your visit more enjoyable you'll find lots of mosquitoes, biting flies, rattlesnakes and black bears waiting. Hunters often come in season for the deer, elk, grouse and mountain lion, but they need special permits for the moose and bighorn sheep. And there's well over 100 trout-filled mountain lakes, if you can just get by the other critters to get there...

To get there: From US Highway 95 in Grangeville go east on Idaho Highway 14 to Forest Service Road 222. Turn right and go south on FSR 222 to the intersection with FSR 468 (the Magruder Corridor). That intersection is 65 miles from Grangeville. Follow the Magruder Road east as far as you want but it will cross Nez Perce Pass and drop down the eastern slopes of the Bitterroot Mountains, ending about 18 miles southwest of Darby, Montana. You can also access the Selway-Bitterroot Wilderness via FSR 223 (the Selway River Road), Wilderness Gateway Campground on Idaho Highway12 and via FSR 360 (the Elk Summit Road). There are access points in Montana at the Lost Horse Campground/Trailhead and the Lake Como Campground/Trailhead. 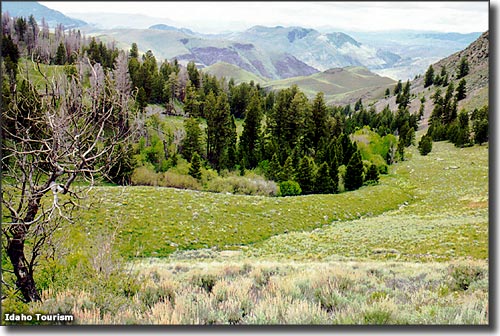