Toxaway Lake in the Sawtooth Mountains 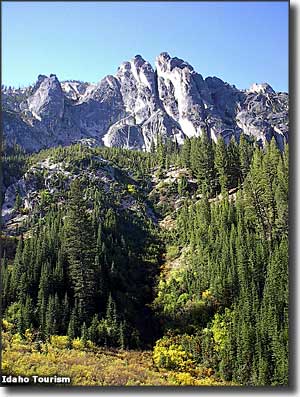 Most of the 217,088 acres of the Sawtooth Wilderness surrounds and includes the Sawtooth Mountains: a spectacular collection of hundreds of jagged peaks, 42 of which top 10,000'. There are more than 100 small alpine lakes sitting in glacial cirques and tranquil basins. The secluded, deep valleys that separate the peaks are forested and filled with a diverse range of wildlife.

The hiking, camping, trout fishing, mountain climbing and hunting are top-notch. There's about 270 miles of trails, composing 42 different routes but there are some areas of the Sawtooth Wilderness you won't get to without good, off-trail route-finding skills. Many of the high lake basins have no trails leading into them. Many of the deep forested valleys also have no trails leading into them. Hiking season is essentially from late June to late September, but the high country may carry snow drifts into July and may see fresh snow as early as Labor Day. The heart of wildflower season is in July and August. Depending on the elevation, it can freeze at night on any night of the year. Warm weather also brings a huge influx of flying, biting insects. Because of the high level of human traffic in some parts of the Sawtooth Wilderness, open fires are banned and group sizes are limited (20 people max) in those areas.

The Sawtooth Range is cut out of the Sawtooth Batholith, a large, mostly pinkish igneous intrusion that has been uplifted and carved by glacial activity over the millenia. The Sawtooths resemble the Tetons a lot with the high, sharp peaks, sheer faces and lakes at their feet impounded by glacial moraines.

There is a potential for 200,000 acres more to be added to the Sawtooth Wilderness, some to the north in the Hanson Lakes Wilderness Study Area but mostly to the west in a large, formerly roadless area (I say "formerly roadless" because after the big forest fires of 1994, 2000 and 2003, some logging roads were cut into the area in an attempt to do some timber salvage) in the Salmon River Mountains.

Wildlife in the Sawtooths is diverse but not truly abundant: something about all that steep, sheer rock and glacial till and moraine. Most of the wildlife is in the lower regions where the rock problem has been somewhat mitigated by the vegetation. But if you look hard enough, you'll find elk, mountain goats, cougar, mule deer, coyote, bobcat, black bear, gray wolf and wolverine.

The 1972 legislation that created the Sawtooth Wilderness also created the Sawtooth National Recreation Area, sort of protecting a large part of the Sawtooth Valley and the White Cloud Mountains to the east. The White Cloud Mountains are immediately north of the Boulder Mountains and the White Cloud-Boulder Mountains region contains about 450,000 acres of roadless area, probably the largest unprotected roadless area in the National Forest system. Legislation to protect the area as wilderness was introduced in Congress several times over the years but between the anti-wilderness sentiments of those who represent the multi-national timber and mining interests (at the expense of the planet) and the general Congressional political infighting, chances of anything changing in the near future was looking pretty bleak. It is doubtful that any real roads will ever be built in the area but the possibility of a few ATV trails is reasonably strong.

Update: 2015. In August 2015 A bill passed through both houses of Congress with a unanimous vote to create White Clouds Wilderness and Hemingway-Boulders Wilderness in the eastern part of Sawtooth National Recreation Area and Jim McClure-Jerry Peak Wilderness beyond that eastern boundary. 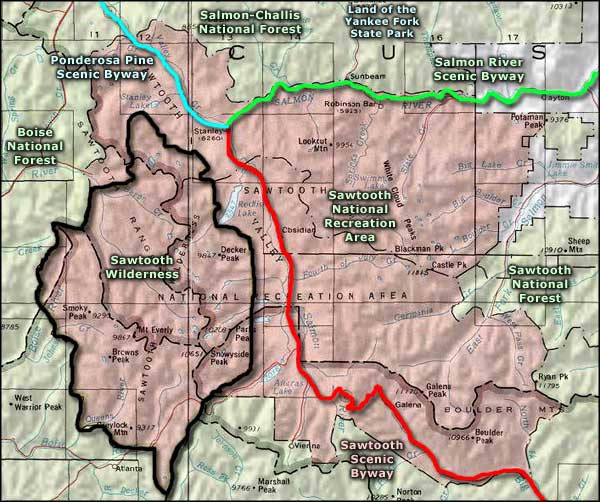