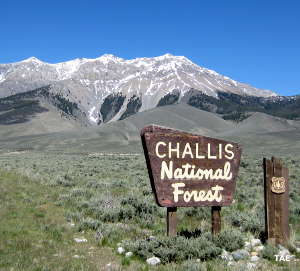 Salmon-Challis National Forest is also home to the Wild and Scenic Salmon River and the Wild and Scenic Middle Fork of the Salmon River. The whole area is a world-class vacation destination for fishermen, hunters, whitewater rafters, hikers, mountain climbers... Even Lewis & Clark and the Corps of Discovery found their way through here, crossing the Continental Divide at Lemhi Pass and then trying to work their way down the Lemhi to the Salmon on their way to the Pacific Coast back in the fall of 1805. The Salmon proved to be too much for them and they ended up crossing the Continental Divide back into Montana, probably over what is now Lost Trail Pass. They went further north in Montana's Bitterroot Valley before trying to cross the Idaho mountain barrier again.

Salmon-Challis National Forest also includes Borah Peak (Idaho's highest point) in the Lost River Range. Other mountain ranges in the forest include the Lemhi Range, the Salmon River Range, the Hawley Mountains, the Donkey Hills, the White Cloud Peaks and the western slopes of the Bitterroot Range (the eastern boundary of the forest is along the Continental Divide, which runs along the crest of the Bitterroot's).

There are 6 Ranger Districts on the Salmon-Challis National Forest:

"I never knew a man who felt self-important in the morning after spending the night in the open on an Idaho mountainside under a star studded summer sky. Save some time in your lives for the outdoors, where you can be witness to the wonders of God."
Frank Church, former U.S. Senator from Idaho

Leadore Ranger District manages and maintains 9 developed camping areas that open in mid-May and close in mid-October (as weather permits). There are also two BLM (Bureau of Land Management) campgrounds in the Lemhi Valley. Hunting, fishing, hiking, camping and horseback riding are all popular activities in the area.

All campgrounds on the Leadore District are limited to a 14 day stay. The Meadow Lake Campground is the only fee campground. Facilities include drinking water, tables and outhouses at most campgrounds. Pets must be on a leash in campgrounds.

Most other campgrounds in the Salmon-Challis National Forest have a 16-day stay limit.