Oxford Slough was acquired by the US Fish & Wildlife Service to protect important redhead nesting habitat in southeast Idaho. Most of the area is a hardstem bulrush marsh, created in a wide, low spot along Deep Creek. Oxford Slough is the drainage for Oxford and Deep Creeks and several other streams in the surrounding mountains.

The marsh is interspersed with areas of open water and surrounded by native wet meadow, saltgrass flats and playa with only a bit of cropland. Most of the lower areas show alkali deposits on the surface.

As part of the marsh is still in private ownership, manipulations of the water level don't happen. If the summer is dry, the marsh goes dry. In wet years, the water level is never deep enough to allow for motorized boats. The fishing is non-existent: there are no fish.

Most of the native pasture hasn't been grazed in years. Most of the meadows, irrigated alfalfa fields and native grass hay fields are mowed and baled regularly to provide short-grass feeding areas for cranes, white-faced ibis, Franklin's gulls and Canada geese. There's also a cooperative farm agreement in place that requires a portion of each crop raised on the land to be left each year for the wildlife.

To get there: About 2 miles north of Swan Lake on Route 91, turn south onto Road D1 and go to the village of Oxford. Pass through Oxford and on the east side of the village there's a small bypass. Go east, just north of Oxford on a gravel road that skirts Oxford Slough WPA. About 3/4 of a mile in, the access road will turn toward a small parking lot next to the marsh. The road into the parking lot may be well hidden by the vegetation. At the end of the road is a small parking area. If it's been raining or it's during spring thaw, you might not want to try the access road: it's not hard packed and can easily suck a vehicle in to its axles.

Oxford Slough WPA is an unmanned station. Hunting is allowed subject to normal Idaho hunting regulations. The marsh usually freezes over by late November and thaws usually during April. The entire WPA is open to foot traffic but campfires and camping are not allowed.

A view of Oxford Ridge from Oxford Slough WPA 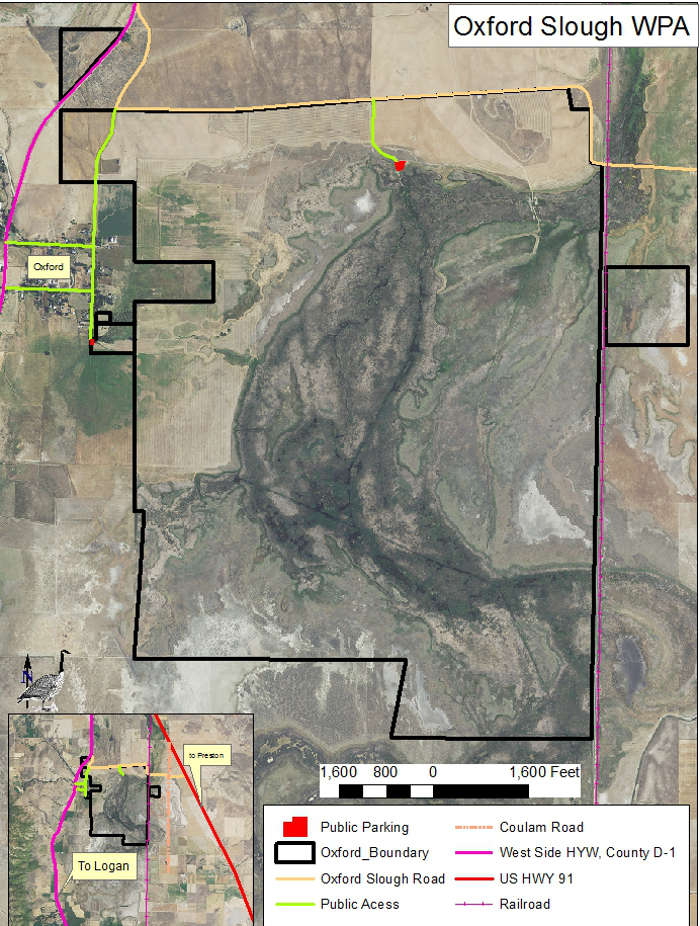