Down in Hells Canyon Wilderness 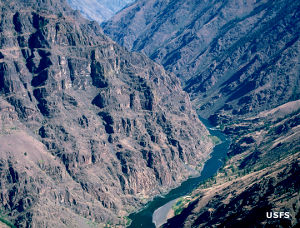 The upper portion of Hell's Canyon Wilderness is a zone of rocky slopes and grasslands that descend to the Snake River along a series of steep, deep-cut drainages filled with groves of Ponderosa pine and Douglas fir. The primary trail heads are at Pittsburg Landing, Windy Saddle and Black Lake. The Snake River National Scenic Trail parallels the Snake River heading south for 31 miles from Pittsburg Landing on the Idaho side of the river. From the river's edge, Hell's Canyon rises an average of 5,500' to the canyon's rim. Hunters will find elk, mule deer, bighorn sheep and chukar in the area.

There are about 360 miles of hiking trails in the Hells Canyon Wilderness. Many of these trails follow old Forest Service access routes built back in the days when the Forest Service actually fought fires. Some of the trails follow routes used by ranchers to move livestock between remote salting areas and watering holes (as the Wilderness Act of 1964 allows certain traditional uses of the land to continue as long as the wilderness values are not compromised, cattle grazing still goes on in parts of Hells Canyon Wilderness - the grazing of domestic sheep was stopped because of the ability of the domestic sheep to pass on diseases to the herds of Bighorn sheep that live in the canyon). While some trails climb right up steep slopes, many also follow ridges and traverse benchlands and more moderate slopes.

The primary trail heads for Hells Canyon Wilderness on the Idaho side are in Pittsburgh Landing, Windy Saddle and Black Lake. The trail most often hiked is the Snake River National Scenic Trail which runs south for 31 miles above the Wild & Scenic Snake River. Along the river, most of the Idaho side of the wilderness extends to just over the canyon rim, except in the area of the Seven Devils Mountains. The Seven Devils Mountains area offers some excellent mountain/canyon/valley wilderness adventure with views everywhere down into and across the deeper Snake River/Hells Canyon.

Trail heads on the Oregon side are at Dug Bar, Warnock Corral, PO Saddle, Hat Point and Buck Creek. The Western Rim/Summit Ridge National Recreation Trail wanders along the upper rim of Hells Canyon while the Nez Perce National Historic Trail makes its way from shelf to shelf just above the Snake River.

As barren as the canyon may seem, you might come across bighorn sheep, mule deer, Rocky Mountain elk and chukar partridge while hiking around. The canyon walls are not designed for climbing: the sharp volcanic rock forms bands of rotten cliffs separated by broken slopes and shelves.

Hiking here in the summer can be something else. In June, at the river's edge, midday temperatures often reach 110°F while those summits you're looking up at in the Seven Devils Mountains still have 5' of snow on them.

A view of Hells Canyon Wilderness from above 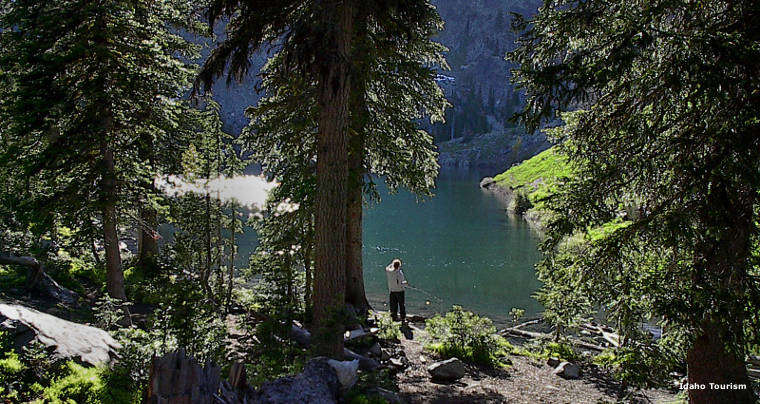 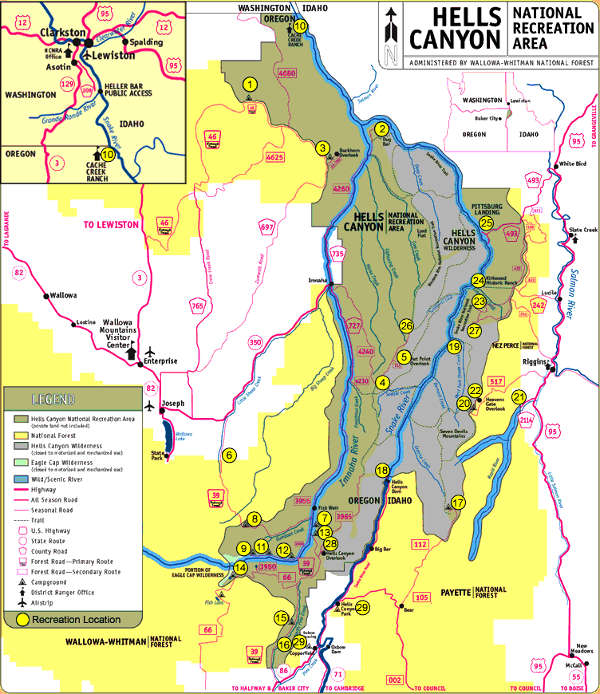