At 19,400 acres, Grays Lake National Wildlife Refuge contains most of what is essentially the largest hardstem bulrush marsh on Earth. The marsh itself occupies about 22,000 acres in the valley. Eventually, Grays Lake NWR is slated to grow to about 32,800 acres in size. Because the water area is mostly covered with a dense growth of cattail and bulrush, there's almost no open water. And around the marsh you'll find mostly wet meadows and grasslands, so there's no real "lake." Because of agreements with local landowners and the Fort Hall Irrigation District, water levels on the marsh can't presently be manipulated so water levels and bird populations vary with seasonal influences (long term rain and snow levels in particular). Once most of the private land around the refuge has been incorporated into the refuge, the ability to manipulate water levels will improve.

Grays Lake is prime crane habitat and the property was used for several years in efforts to bring the endangered whooping crane back from the edge of extinction. However, the whooping cranes hatched and raised here did not return to breed here so efforts to create additional whooping crane flocks have shifted to other areas in the National Wildlife Refuge system. But if you're looking for sandhill cranes: Grays Lake is the place to be. Some years have seen more than 200 nesting pairs on the property. And during the fall staging period (before they fly south to New Mexico and Arizona), as many as 3,000 cranes have been counted in the valley at one time.

Cranes above Grays Lake NWR in the springtime

Grays Lake is located in the mountains north of Soda Springs and southeast of Idaho Falls. This is a beautiful area of scenic vistas filled with summer wildflower displays and great fall colors. More than 200 species of mammals, reptiles, birds and fish live here, all of them breeding and nesting at Grays Lake somewhere.

From May 1 to November 15, the overlook adjacent to the refuge headquarters is open for public use. Hiking is allowed in the northern half of the refuge between September 20 and March 31. Cross-country skiing and snowshoeing are subject to the same time dates and restrictions as hiking. Fishing, boating, campfires and camping are not allowed.

The turnoff to Grays Lake NWR is about 27 miles north of Soda Springs and 21 miles west of Freedom, Wyoming on Idaho Highway 34 (the Pioneer Historic Byway). The turnoff is well-signed and it's about 3 miles from there to the refuge office, visitor center and overlook. The visitor center is open daily from April 1 to November 15. The refuge headquarters building houses some indoor exhibits. The refuge office is also open daily from April 1 through November 15 but may be closed if personnel are in the field. Hunting is permitted in certain designated areas in season, hunting for coots, geese, ducks and mergansers... 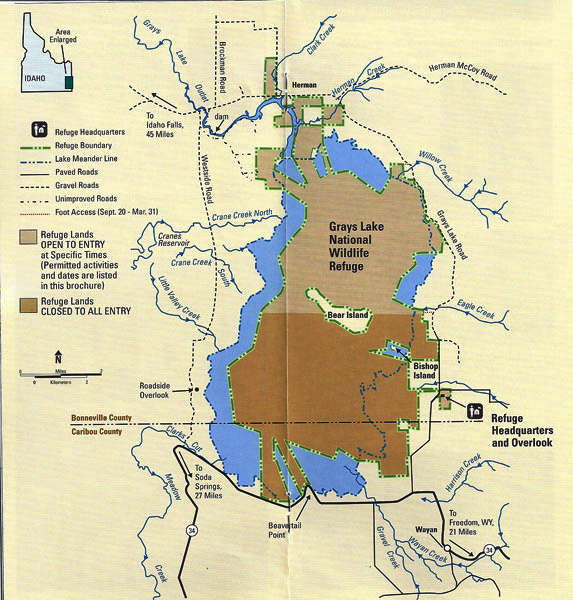