Craters of the Moon National Monument

Craters of the Moon National Monument 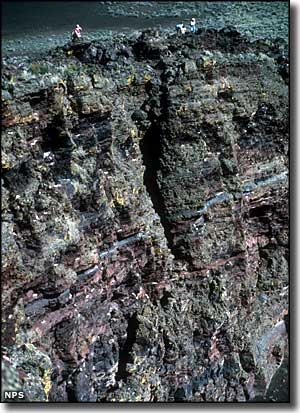 Craters of the Moon National Monument and Preserve is comprised of 714,727 acres of a relatively new and well-preserved flood basalt area on the edge of the Snake River Plain in eastern Idaho. Contained on the property are three major lava flows and about 400 square miles of sagebrush/grasslands steppe. All three lava fields are products of the Great Rift of Idaho, an open (and still active) rift crack in the surface of the Earth. There are places at Craters of the Moon where the rift crack is up to 800 feet deep. The Great Rift is a crack in the Earth's crust resulting from the Basin and Range uplifting and rifting millenia ago. The rift extends almost all the way across the Snake River Plain.

There are 60 distinct lava flows on the property ranging in age from 15,000 years ago to 2,000 years ago. The Shoshone have legends about a serpent on a mountain being angered by lightning. The serpent coiled around the mountain and squeezed until fire shot from the cracks and liquid rock flowed out. Archaeological evidence in the area shows the Shoshone were present during the time of at least the most recent lava flows. Geologists say the field is presently dormant but expect more eruptions sometime over the next 1,000 years. Historically, lava flows occur every 500 to 3,000 years and flow for up to 1,000 years each time. The original cause of the uplift and lava flows is thought to be the presence of the magma hot spot that is presently situated beneath the Yellowstone Caldera. Activity still happens on the Snake River Plain because there is still significant heat in the ground and fault lines in the crust allow that heated magma and contained energy to easily flow upward.

Early Euro-American pioneers avoided the area because the lava made the ground extremely treacherous to travel on. It was 1901 before a geologist tried to explore the property, the end of World War I before anyone got serious about it. President Calvin Coolidge proclaimed the National Monument finally in 1924 and it has been expanded several times since. 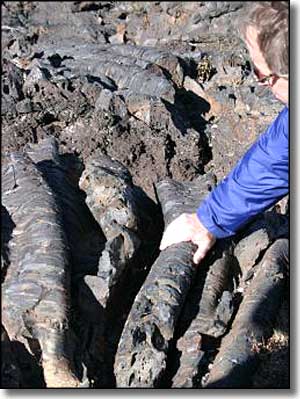 Today, the property is a mix of National Park Service land and Bureau of Land Management property. The National Monument & Preserve is co-managed by both services. In 1970, 43,243 acres of the National Park Service property were set aside by Congress as Craters of the Moon National Wilderness. At this point, Craters of the Moon National Monument & Preserve contains nearly all of the three major lava flows and most of the Great Rift Zone. The original effort was to make the entire property a National Park but opposition from hunters and cattle ranchers led to a compromise that created the Preserve as a place that allows hunting and cattle grazing (neither of which are allowed in National Parks or Monuments).

Craters of the Moon National Monument & Preserve is open year round. However, winter snows can limit access around the Loop Road from mid-November through mid-April. The property itself is open 24 hours a day but the visitor center is only open from 8 am to 4:30 pm daily (8 am to 6 pm from Memorial Day weekend through September 12). The visitor center is also closed on Federal holidays during the winter season.

The entrance fee is $8 per vehicle. Folks on foot, bicycle or motorcycle pay $4 per person. People under 16 years of age enter free. Commercial tour vehicles also pay fees. When the Loop Road is closed there is no entrance fee. All National Parks Passes, Golden Eagle, Golden Eagle Hologram, Golden Access and Golden Age Passports are honored according to the provisions of each pass. 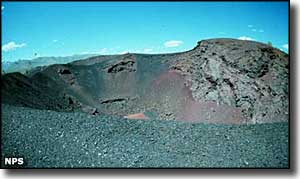 The nearest lodging and food services are in Arco, 18 miles east of the visitor center. 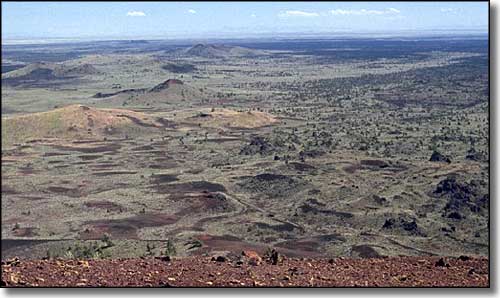 Craters of the Moon National Monument and Preserve 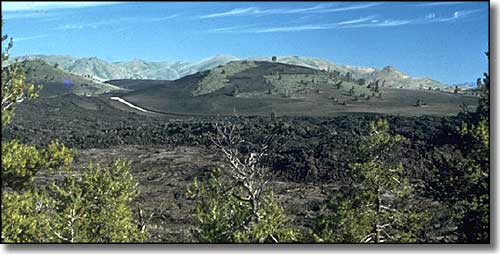 From a high point at Craters of the Moon National Monument 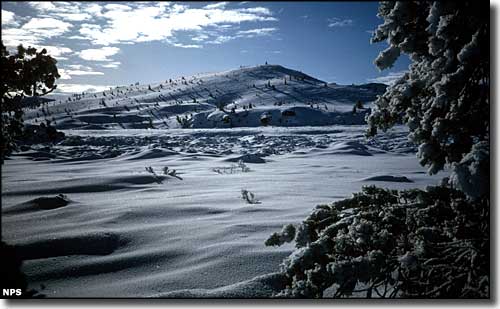 Near North Crater: a very deceptive surface when covered in snow 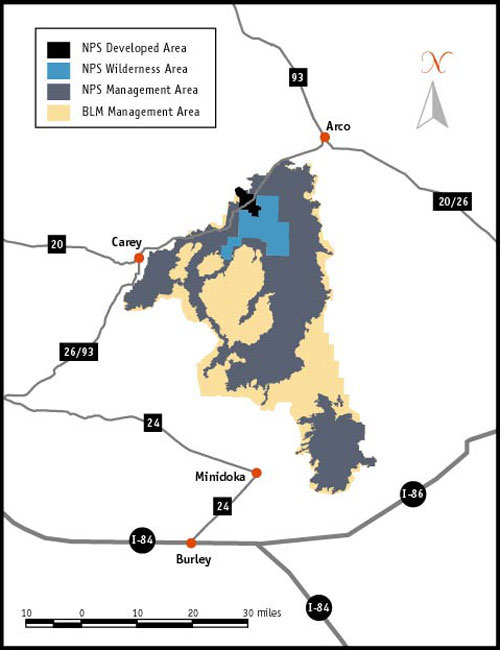