Swans on a pond at Camas National Wildlife Refuge 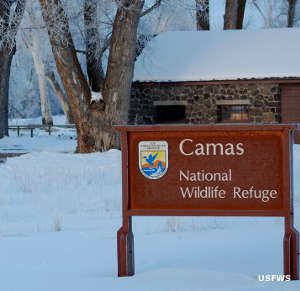 Camas National Wildlife Refuge (10,578 acres) is another of those places with wetlands and sagebrush uplands that were set aside to provide protection and a resting place for resident and migratory birds, primarily waterfowl. About half of the property at Camas NWR is grassy sagebrush uplands, meadows and planted fields. The other half is ponds, lakes and surrounding marshlands. Camas Creek flows through the whole length of the refuge (about 8 miles) but in recent years, its water level has been dropping due to agricultural development and natural drought cycles.

Camas NWR is an "old" National Wildlife Refuge: most of the administration buildings, bridges and water control structures were built back in the 1930's by Works Progress Administration crews. At this point, the refuge has drilled several water wells and constructed ditches to carry the water to where it needs to be for the wildlife (especially the nesting waterfowl) in those times when the creeks are dry. Over the years an extensive network with 9 wells, 31 miles of canals, 12 miles of dikes, 8 bridges, several ponds and 25 water-control structures has been built up. The refuge also plants and grows crops specifically for the wildlife's benefit, crops like wheat, barley and alfalfa.

So, when migration is on, Camas NWR may see up to 50,000 ducks and 3,000 geese on a good day. Also among the regular visitors are cranes, herons, ibis, and trumpeter and tundra swans. The songbirds tend to pass through on their way north in May and June. They return south in August and September. Most of the waterfowl pass through in March and April, and return in October and November. And then there's the birds that arrive in the spring, build their nests, lay their eggs, raise their young and then leave in the fall.

For big game, the most common animal sighted is white-tailed deer, then mule deer and pronghorns. Elk are seen now and then, and down in the riparian areas along Camas Creek you could run into some moose. You might also come across badger, red fox, porcupine, long-tailed weasel, beaver, muskrat, coyote and cottontail rabbit.

For human visitors the refuge offers the Wildlife Viewing Route, a gravel road that winds through fields and past some of the marshes and ponds. Roads marked as "Road Closed Except by Permit" require a free, self-registration permit and are only open from September 20 through January 15. The permit is available at the refuge headquarters information kiosk. Hiking is allowed on the roads year-round but back country hiking is not allowed from March 1 through July 15. The universally accessible hiking trail is open from March 15 through September 20. Cross-country skiing and snowshoeing are allowed along the same routes as hiking. Boating, fishing, campfires and camping are not allowed at any time. Also not allowed is the collecting of natural objects like minerals, plants, animals, antlers or prehistoric artifacts.

Camas National Wildlife Refuge is about 36 miles north of Idaho Falls. Elevation: 4,800'. To get there: On the I-15, get off at exit 150 (Hamer), and go east for about 1/4 mile to Hamer. Go north on the frontage road. About 3 miles down turn west and go another 2 miles to the refuge entrance. Once you leave the Interstate, just follow the signs. The refuge is open to the public daily from half-an-hour before sunrise to half-an-hour after sunset. Except for weekends and Federal holidays, the refuge office is generally open Mondays through Thursdays from 7 am to 4:30 pm and on Fridays from 7 am to 3:30 pm. 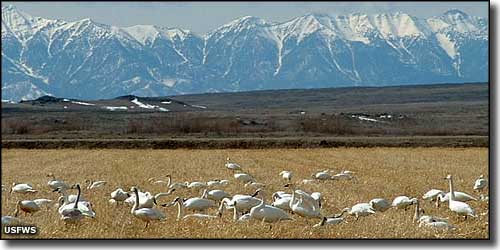 Tundra swans on a grain field at Camas NWR 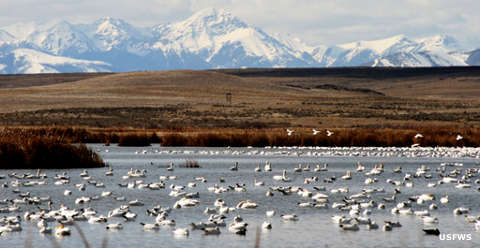 A view of Snow and Trumpeter swans on Big Pond 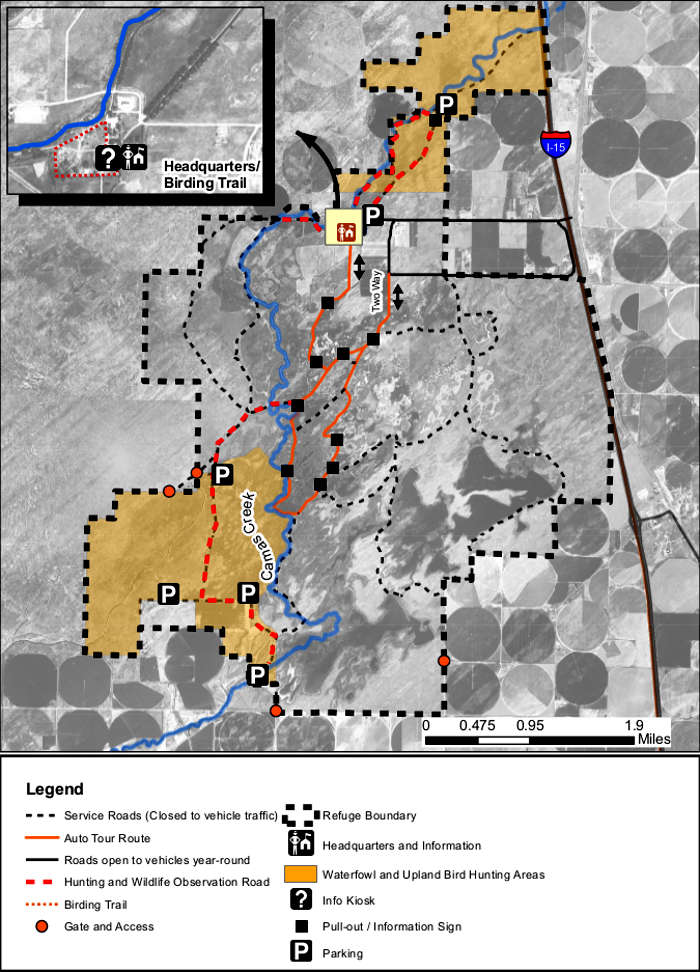 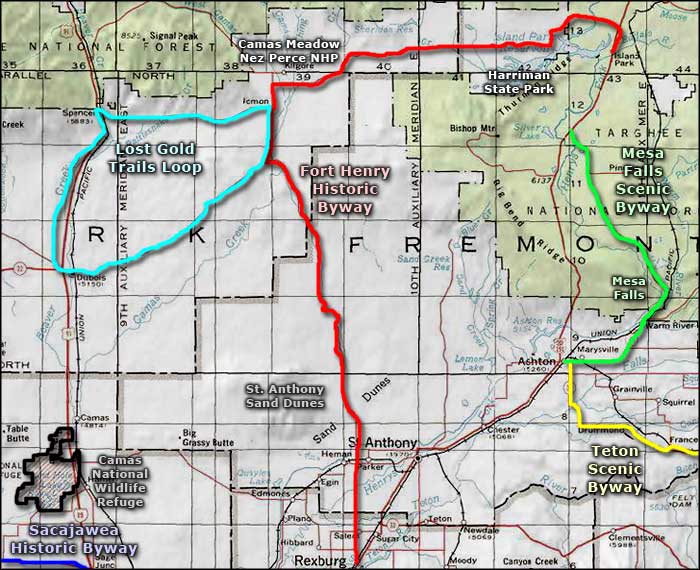