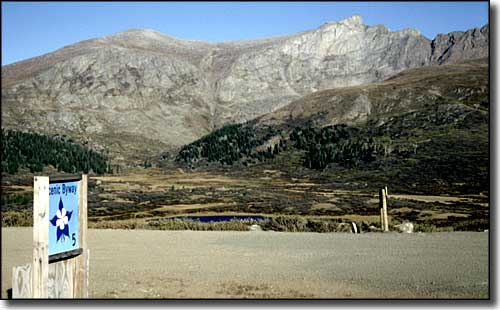 Mount Bierstadt from the summit of Guanella Pass 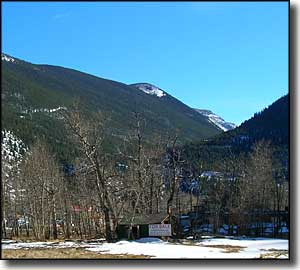 Guanella Pass Road from Georgetown,
through that canyon

The Guanella Pass Road is a 22-mile route that crosses the steep divide between the Clear Creek and South Platte River watersheds, passing through a series of distinct life zones. The lower elevations are thick with stands of spruce, fir, aspen and pine. Higher up the streams are coursing through broad meadows filled with wildflowers in summer. Guanella Pass itself is well above timberline in the fragile alpine tundra.

The Georgetown Loop Railroad runs through the high country mining district between the silver-boom mining towns of Georgetown and Silver Plume near the northern end of the Guanella Pass Road. The Railroad is part of the Georgetown Loop Historic Mining and Railroad Park, a property of the Colorado Historic Society. The original 3-foot narrow gauge railroad was completed in 1884 and was an engineering marvel of its time. Georgetown and Silver Plume are only 2 miles apart in a steep, narrow canyon but the 640-foot difference in elevation required the railroad''s builders to design a "corkscrew" route that traveled 3.1 miles between the 2 towns. The route includes horseshoe curves, grades up to 4% and 4 bridges across Clear Creek, one of them being a replica (built in 1984) of the original massive Devil's Gate High Bridge. Colorado & Southern Railway steam locomotive #9, built in 1884, was restored in 2006 and now runs the line on daily trips. A round trip runs about 7 miles and takes about 1 hour, 15 minutes. There is an optional tour of the Lebanon Silver Mine in the middle of the ride that may take another 1 hour, 15 minutes (the mine is accessible only via the train and you'll need to buy a combination train and mine ticket to take the tour).

The route across Guanella Pass was formerly a wagon trail used by miners and freighters traveling between Georgetown and Grant. Some gold was found in the area but the fortunes were built on silver. For a number of years, Georgetown was known as the "Silver Queen of the Rockies." The only nearby gold mine still in operation is in Idaho City.

The Guanella Pass Road is also often used these days by mountain climbers looking for the quickest and easiest route up onto Mount Bierstadt (14,060'). The road often sees serious rockfall and landslides. In addition, virtually the entire route is lined with guardrails that make snow removal extremely difficult. As a result, the road is usually closed from the first heavy snow in the fall to the end of May (Colorado does try hard to get all their roads open for the Memorial Day Weekend). 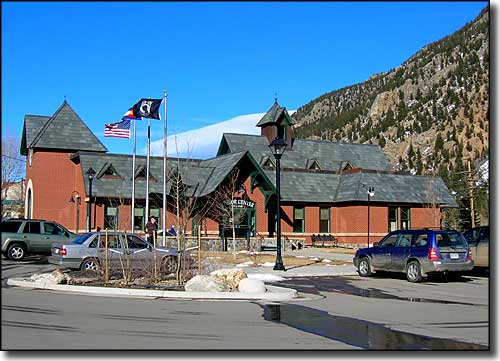 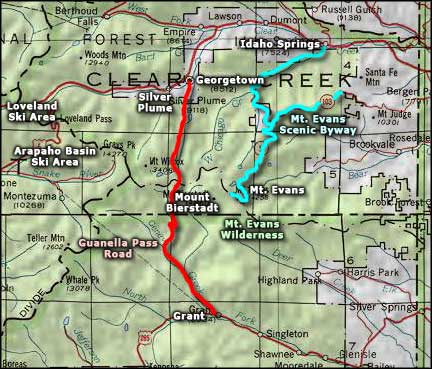