Marble Mountain Wilderness is a 241,744-acre property on Klamath National Forest in northern California. Marble Mountain was set aside as the Marble Mountain Primitive Area in 1931, then expanded a bit and designated full wilderness in 1964. The name comes from the coloration of the light-colored limestone and black metamorphic rock on some peaks: it gives the area a sort of "marbled" look.

In the heart of the wilderness are the horseshoe-shaped Salmon Mountains and Marble Mountain itself is a north-trending spur of the Salmons. Marble Mountain is also composed of layers of prehistoric marine invertebrates which lend more color to the rock. Elevations range from a low around 400 feet to a high of 8,299 feet on the summit of Boulder Peak.

There are 89 lakes on Marble Mountain Wilderness, almost all the result of ancient glacial activity. The state keeps most lakes stocked with trout while the larger streams often carry native salmon and steelhead trout (depending on the season). Among the large mammals on the property are significant numbers of blacktail deer, black bear and coyotes while there are smaller numbers of wolverine, bobcat, mountain lion and badger. The forest here is also a wild mix of seventeen species of conifers, some locally rare.

32 miles of the Pacific Crest National Scenic Trail exist on Marble Mountain Wilderness, as well as a long north-south section of the Bigfoot Trail. Wooley Creek and the North Fork Salmon River are designated Wild and Scenic Rivers that flow across the wilderness. There are several Forest Service campgrounds just outside the wilderness boundary and one campground inside the boundary near Wooley Creek. 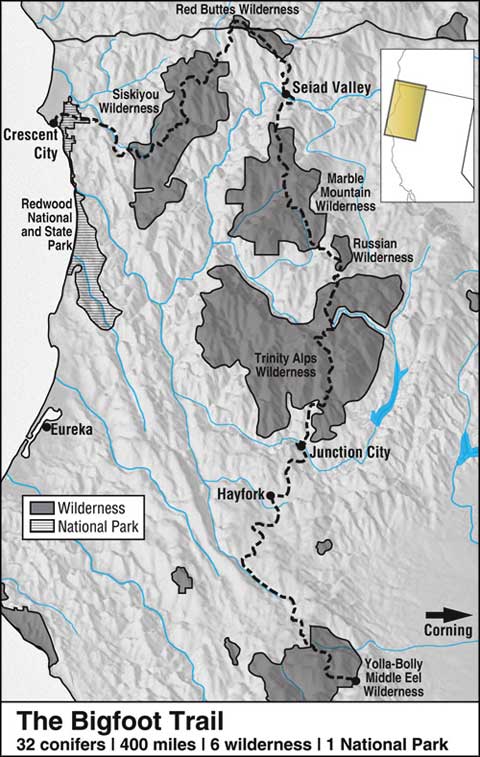